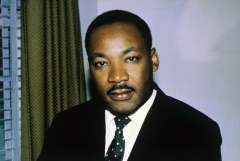 The legacy of Rev. Martin Luther King is being dishonored on a daily basis. Those who are trashing his noble record are not white supremacists; rather, they are professionals who claim to be fighting racism. These people work primarily in education, law, and the media. Regrettably, they are as heavily populated in the for-profit sector of the economy as they are in the non-profit sector.

It was in King's 1963 "I Have a Dream" speech that he articulated his vision of America. While he made several references to problems facing blacks, ranging from discrimination in public accommodations to police brutality, he did so against the backdrop of respect for the American commitment to liberty, equality, and justice for all. Indeed, his "dream" was based on his conviction that these goals would eventually be reached.

Unlike today, where street anarchists and professional agitators are tearing down statues of American icons, King was celebrating these heroic figures. He opened his speech by referencing the Emancipation Proclamation, calling its author (Lincoln) "a great American." He also credited the Founders, whom he called "the architects of our republic," for writing "the magnificent words of the Constitution and the Declaration of Independence."

King knew that the goals of these documents were a work in progress, but he was wise enough to know that the Founders gave us "this promissory note," without which appeals to liberty, equality, and justice were impotent.

"America has given the Negro people a bad check," he noted, but "we refuse to believe the bank of justice is bankrupt." He never gave up hope, insisting that "Now is the time to make justice for all of God's children." That was a very Christian response.

Now contrast what King said with what our new ambassador to the United Nations recently said. Linda Thomas-Greenfield told reporters in New York City that "the original sin of slavery weaved white supremacy into our founding documents and principles." Wrong. It was our inalienable rights that were weaved into our founding documents and principles.

King would have been appalled. He had nothing but praise and admiration for our founding documents and principles. His problem was with our failure to make good on what they embodied, namely the contents of the American creed.

Indeed, it was precisely the documents and principles that galvanized him to act—they were the "promissory note." If anything, the existential reality of white supremacy at the time of the founding was the complete opposite of what our creed entailed, and it was this inconsistency that he used, to great effect, to leverage the civil rights movement.

I have a dream that my four little children will one day live in a nation where they will not be judged by the color of their skin but by the content of their character.

This classic statement by King is now seen as contemptible by those who promote critical race theory. The proponents expressly judge people by the color of their skin, treating the content of their character as meaningless. Their demonization of white people—asking them to repent for their alleged positions of privilege—is patently racist. To them, the individual does not count; only his collective ascribed status does. Ironically, that's what the slave masters believed about blacks.

Martin Luther King would be very happy with legislation recently passed in Idaho. This law prohibits public schools from teaching that "any sex, race, ethnicity, religion, color, or national origin is inherently superior or inferior." Who objects? Critical race theory advocates. This explains why the entire Oklahoma City School Board of Education slammed a law that is based on the Idaho legislation. One critic said the non-discrimination law was done to "protect white fragility."

The governor of Oklahoma, Kevin Stitt, sounded very much like King when he said, "I firmly believe that not one cent of taxpayer money should be used to define and divide Oklahomans by their race or sex." He added that "We can, and should, teach this history without labeling a young child as an 'oppressor' or requiring he or she feel guilt or shame based on their race or sex."

Rev. Martin Luther King sought to bring the races together. Today's brand of "anti-racism and discrimination" activists seek to drive the races apart. In doing so they are at odds with the principles upon which our nation was founded. Indeed, they are fomenting racism, thus dishonoring King's legacy.