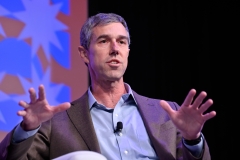 Those who heckle a candidate for public office deserve to be removed from the venue where the incident takes place. When they are, it is to be expected that the candidate's fans respond with applause. What is not expected is for the candidate to call the heckler a "mother******."

That's what Beto O'Rourke did. The fans of the candidate for Texas governor—there weren't too many in attendance—cheered him on. No one was more supportive than John Avlon, a CNN commentator.

"It speaks to a need," Avlon said, "a desire right now for a fiery liberalism that fights back." Indeed, it goes beyond that. "It speaks to an unmet need in the Democratic base."

What is that need? Avlon didn't say. And why did it have to be filled by calling the heckler a "mother******"? If O'Rourke had called the guy a jerk, why wouldn't that have met the "unmet need in the Democratic base"? Is there something perverse about the base of the Democratic Party that only a vulgar man like O'Rourke can fulfill?

Reporters who have covered O'Rourke have long noted what a filthy mouth he has. He likes hurling F-bombs so much that every time he loses a race for office—which is every other year—he drops it again.

In 2020, Politico said O'Rourke is "apparently hoping that vulgarity will be an engine of his political revival in the Democratic presidential contest." It obviously didn't work.

No matter, Avlon thinks it may work this time around. When CNN panelist Errol Lewis questioned whether O'Rourke's obscene attack on the heckler will help him politically, Avlon shot back, "I can make a counter case." That's when he spoke about the "unmet need in the Democratic base" for politicians who use obscenities in public.

Is that what the public wants, or just the base of the Democratic Party?

In 2016, a survey of Americans found that 70 percent said incivility in politics was at a "crisis" level.

In his Inaugural Address, Joe Biden spoke of the need for civility in politics. When he appeared on "The Tonight Show" with Jimmy Fallon in December last year, he lamented the lack of civility in politics. In 2011, PBS ran a headline, "President Obama's Call for Civility," and in 2016 The Hill featured a story, "Obama Calls for Increased Civility in Politics."

But did they mean it? Speaking about O'Rourke's penchant for vulgarities, Stephanie Cutter, Obama's 2012 deputy campaign manager, said in 2019 that "It's good for him to show a little emotion and get angry so that people can see exactly where he stands and that he will fight for what he believes in."

Somehow Ronald Reagan managed to tell the American people "exactly where he stands" and "what he believes in" without getting crude. Perhaps that's because there was no "unmet need" to speak like a tramp to the base of his party.

When O'Rourke loses again, it remains to be seen how long it will take before he meets the "unmet need in the Democratic base."