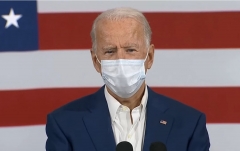 Never before in American history have there been as many members of a presidential administration who have openly declared the United States to be a racist nation. Here is a sample from the Biden administration.

President Joe Biden: "Systemic racism that is a stain our nation’s soul; the knee on the neck of justice for Black Americans; the profound fear and trauma, the pain, the exhaustion that Black and brown Americans experience every single day... this takes acknowledging and confronting, head on, systemic racism and the racial disparities that exist in policing and in our criminal justice system more broadly."

Vice President Kamala Harris: "America has a long history of systemic racism.  Black Americans — and Black men, in particular — have been treated, throughout the course of our history, as less than human."

Sec. Janet Yellen, Department of the Treasury: "The country is also facing a climate crisis, a crisis of systemic racism, and an economic crisis that has been building for fifty years.... I believe economic policy can be a potent tool to improve society. We can – and should – use it to address inequality, racism, and climate change."

Sec. Lloyd Austin, Department of Defense: "'If confirmed, I will fight hard to stamp out sexual assault, to rid our ranks of racists and extremists, and to create a climate where everyone fit and willing has the opportunity to serve this country with dignity,' Austin, 67, said at his confirmation hearing." "'The job of the Department of Defense is to keep America safe from our enemies. But we can't do that if some of those enemies lie within our own ranks,' Austin told the Senate Armed Services Committee."

AG Merrick Garland, Department of Justice: "'I think it is plain to me that there is discrimination and widespread disparate treatment of communities of color and other ethnic minorities in this country,' Judge Garland says when asked to define systemic racism."

Sec. Deb Haaland, Department of the Interior: "We must acknowledge the pain that African American communities across the nation and around the world are feeling during these turbulent times and commit ourselves to real progress."

"Serious inequities exist in this country. We cannot continue with business as normal. We must tackle these issues and build a country where race doesn't determine access to opportunity, justice, and accountability."

Sec. Tom Vilsack, Department of Agriculture: "'We'll have an equity commission, which will begin the process of investigating all of the programs at USDA to make sure that we identify and root out any systemic racism that may exist in those programs,' said Vilsack. 'Now, the reality is that we’ve not only had discrimination in the past but we’ve had the cumulative effect of that discrimination, which needs to be addressed.'"

Sec. Gina Raimondo, Department of Commerce: "Our work to dismantle systemic racism in Rhode Island did not start today and it will not end today, but we can rise together and make meaningful progress toward racial equity now."

"And the fact of the matter is, we know that lack of investment, particularly in public transportation, transit, water, housing, has hurt low-income folks and people of color the most. And it’s time to finally rectify that systemic inequality and build back better and more equally."

Sec. Marty Walsh, Department of Labor: "You have to be very intentional about dealing with systemic racism. Systemic racism just didn’t come in since May of last year. Systemic racism has been here forever, if you want to be honest about it. But we have a unique opportunity when we talk about recovering from covid-19 to be able to really focus on the issue of systemic racism, also inequality, gender inequality and all kinds of other types of inequality."

"White people shouldn’t be afraid of the word white privilege. It can be a complicated conversation to have, but we can’t run away from it."

Sec. Xavier Becerra, Department of Health and Human Services: "We must meet the challenge to further justice and equity. At HHS, I will do everything I can to tackle racism as a serious public health threat that affects our mental and physical well-being." "We at the Department of Health and Human Services stand with marginalized communities to provide support and do our part to ensure that health and well-being are treated as a right and our systems are actively furthering justice."

Sec. Marcia Fudge, Department of Housing and Urban Development: "'Black people have always been aware of systemic and institutional racism. COVID-19 just proved to the rest of the country that it exists."

Sec. Pete Buttigieg, Department of Transportation: "'Black and brown neighborhoods have been disproportionately divided by highway projects or left isolated by the lack of adequate transit and transportation resources,' Mr. Buttigieg tweeted in December. In an interview earlier this month, he reiterated that 'there is racism physically built into some of our highways” and said the infrastructure program includes money “specifically committed to reconnect some of the communities that were divided by these dollars.'"

Sec. Jennifer Granholm, Department of Energy: "Her voice wavered as she compared her own son to Martin. 'I have a wonderful teenage son too and he wears hoodies and he carries his cellphone and he likes skittles and if this were my son, my God,' she continued. 'But let's face it. This is not something that would happen to my son or many other sons. This happened because Trayvon was black.'"

Sec. Miguel Cardona, Department of Education: "Our country faces multiple crises – including a health pandemic & a pandemic of hate & racism that has been prevalent for centuries."

Sec. Denis McDonough, Department of Veteran Affairs: "'Confronting this question of racial inequity will be a fundamental part of my tenure here, not least because the president is demanding it,'

Sec. Alejandro Mayorkas, Department of Homeland Security: "DHS will continue to lawfully monitor threats posed by foreign terrorist organizations. But we also know that the threat posed by domestic violent extremism will remain persistent. We have witnessed an increase in domestic attacks, particularly by white-supremacist, anti-government and anti-authority extremists. The majority of these attacks have targeted communities of color and other minority groups."

Shalanda Young, Acting Director of the Office of Management and Budget: "America is confronting four compounding crises of unprecedented scope," including "a national reckoning on racial inequity centuries in the making."

Office of Management and Budget: "'The moment has come for the nation to deal with systemic racism and to ensure the promise of America is finally and fully open to all — not just some — Americans.'"

Susan Rice Domestic Policy Council chief: "I'd say better late than never. You know, to serve an administration which has been racist to its core for the last three and a half years, from comparing the peaceful protesters at Charlottesville to white supremacists, calling white supremacists very fine people, all the way through to the recent weeks where the administration has disparaged the Black Lives Matter movement, disparaged the peaceful protesters, and basically made plain that they prefer to stand by a Confederate legacy than a modern America, it's been an administration whose record on race is just disgraceful," Rice said

"For too many American families, systemic racism and inequality in our economy, laws and institutions, still put the American Dream far out of reach," she said.

Michael S. Regan Administrator of the Environmental Protection Agency: "We must strengthen our state laws and regulations to be more inclusive of communities of color and tribal concerns before a location is chosen and well before a permit application is submitted. This process highlights the allegations of systemic racism that zoning and business-friendly regulations perpetuate against communities of color."

Linda Thomas-Greenfield United States Ambassador to the United Nations: "I have seen for myself how the original sin of slavery weaved white supremacy into our founding documents and principles."

Isabel Guzman Administrator of the Small Business Administration: "Systemic racism is a persistent roadblock for women and minority small business owners. This was true before the pandemic, and unfortunately, it’s even more true now."

Ron Klain White House Chief of Staff: "We face four overlapping and compounding crises, including "a racial equity crisis." "Much more will need to be done to... combat systemic racism and inequality."

Cecilia Rouse Chair of the Council of Economic Advisors: "Racism in the justice system and discrimination in the labor market and health care system are not new, but the death of George Floyd and others at the hands of police, and the disparate impacts of Covid-19 and the economic crisis on black and brown communities have laid bare how racism permeates every facet of American life."

(Bill Donohue is president and CEO of the Catholic League for Religious and Civil Rights, the nation's largest Catholic civil rights organization. He was awarded his Ph.D. in sociology from New York University and is the author of eight books and many articles.)