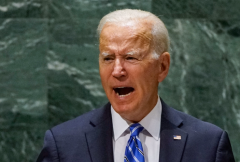 The Biden administration has already proven to be a radical advocate of abortion-on-demand and transgender rights. Worse, these policies almost always come at the expense of religious liberty. Its latest iteration is a proposed rule change from the Trump years that would threaten the rights of Catholic doctors and the autonomy of Catholic hospitals.

The Department of Health and Human Services (HHS) wants to amend Section 1557 of the Affordable Care Act (a.k.a. ObamaCare) to prohibit discrimination on the basis of sex to include "sexual orientation and gender identity." The public has until October 3rd to comment on the proposed rule change.

The effect of this change would be dramatic. To begin with, there is a profound difference between discriminating against a biological female and a man who claims to be female, and vice versa. No one supports discrimination against real women, but to force Catholic doctors and hospitals to perform genital mutilation surgery on men who want to "transition" to a woman is a violation of their First Amendment right to religious liberty.

Roger Severino, who ran the HHS Office of Civil Rights under Trump, and who now works at The Heritage Foundation, tells us what to expect.

"This rule will mandate that insurance companies cover the full menu of gender identity interventions such as mastectomies, hysterectomies, breast augmentation, hair removal, and a lifetime of cross-sex hormones, including for minor children. It would also force doctors to perform cross-sex surgeries and to administer puberty blockers to children if they believe such intervention 'can never be beneficial.'"

In other words, this rule would prevent Catholic doctors and hospitals from abiding by the tenets of their faith, in essence forcing them to violate their conscience rights or go out of business.

They did not buy the idea, floated by the Biden administration, that claims the new rule would not impact on religious liberty. "Assurances that HHS will honor religious freedom laws offer little comfort when HHS is actively fighting court rulings that declared HHS violated religious freedom laws the last time they tried to impose such a mandate."

The proposed rule change not only infringes on the First Amendment rights of Catholics, it threatens the well-being of children. The Biden administration's support for puberty blockers is dangerous. The Food and Drug Administration recently said these hormones and drugs can cause brain swelling and vision loss. This is child abuse.