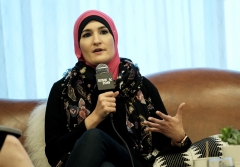 Linda Sarsour speaks onstage at Mothers of the Resistance: Women Leading the Movement during the 2019 SXSW Conference and Festivals at JW Marriott Austin on March 11, 2019 in Austin, Tex. (Photo credit: Rita Quinn/Getty Images for SXSW)

A former leader of the Women's March, Linda Sarsour was forced to step down from its board after being accused of anti-Semitism.

Sarsour not only supports Sharia law, but she is also a strong advocate of the BDS (Boycott, Divestment, Sanctions) movement, the organized campaign to economically crush Israel. She recently endorsed Joe Biden.

Yesterday, she spoke at a Democratic National Convention (DNC) council meeting. However, the Biden camp quickly moved to distance him from her. Biden spokesman Andrew Bates told CNN that the Democratic candidate for president "obviously condemns her views and opposes BDS, as does the Democratic platform."

This defense of Biden does not resolve this issue.

Why was Sarsour invited to participate in a DNC event in the first place? She is not known for anything other than her Jew-bashing. Also, why did Biden share a platform with her as recently as a few weeks ago? Both of them spoke at a "Million Muslim Votes Summit" (he was in his basement, of course).

With whom did Omar meet on her first day in Congress in January 2018? Sarsour. In July 2019, Omar voted against condemning the BDS movement.

In March 2020, Tlaib, whose anti-Semitism is already legendary, wore a T-shirt of the State of Israel replaced with a Palestinian state. She also proudly displayed a new book written by Sarsour.

During the confirmation hearings for Brett Kavanaugh, Sarsour interrupted the proceedings for the Supreme Court nominee by screaming at him. Who congratulated her? AOC. The New York firebrand then offered a glowing endorsement of Sarsour, tweeting that Sarsour is "fighting for everything our flag represents." The month before the hearings began, Sarsour said AOC is "pro-Palestinian, and she's unapologetic." She added, "Alexandria is what represents us and our values."

Biden is in a jam. It does not matter whether he is aware of the anti-Semitic convictions of Sarsour, Omar, Tlaib, or AOC. What matters is that his handlers are aware of them—they know exactly what they are doing. And that does not bode well for anyone.