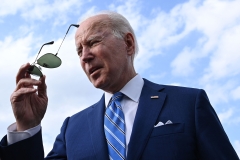 Joe Biden speaks to members of the media prior to boarding Air Force One. (Photo credit: MANDEL NGAN/AFP via Getty Images)

President Biden has now condemned the firebombing of a Christian pro-life office in Madison, Wisc., but he did not address this crime as the work of pro-abortion arsonists. They left graffiti outside the building that said, "If abortions aren't safe then you aren't either."

Worse, Biden has said nothing about the wave of anti-Catholic incidents that have occurred in early May. In doing so, he is giving succor to bigots. Here are some examples.

It is shameful that our "devout Catholic" president has not said a word about any of these anti-Catholic incidents. Not to comment on what happened in Los Angeles, in particular, is outrageous.

Moreover, Catholics on the Supreme Court are being singled out for harassment. The pro-abortion group, "Ruth Sent Us," has explicitly called on activists to confront Catholic Supreme Court justices: they encourage them to invade their privacy by demonstrating in front of their homes, seeking to intimidate them and their families.

This is another example of bigotry, yet Biden can't bring himself to call it for what it is — rank anti-Catholicism. We Catholics would get more outrage from a non-Catholic president.