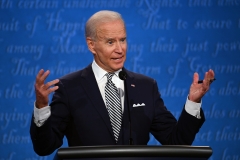 "Roe says what all basic mainstream religions have historically concluded — that the right — that the existence of a human life and being is a question. Is it at the moment of conception? Is it six months? Is it six weeks?"

Those are the latest words of wisdom from President Biden.

What "basic mainstream religions" have to say about when life begins is interesting, but it should not be controlling. What matters is what science says. We have known for a long time that life begins at conception.

People can debate all they want about when "personhood" begins — but be careful lest they slide down the eugenics slope — the ultimate issue is this: If what develops at fertilization proceeds undisturbed, the result many months later will be a baby boy or girl. Just as important, all of the characteristics that constitute the uniqueness of this new life were there from the time of conception. This is Biology 101.

The Catholic Church does not follow the science — it has been well out in front of it. It's about time our "devout  Catholic" president caught up as well. There is no more "question" about when life begins, Mr. President — the answer is there for anyone not living in a state of delusion.