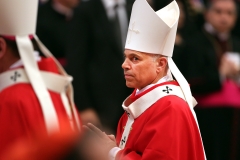 Archbishop of San Francisco Salvatore Joseph Cordileone attends the mass and imposition of the Pallium upon the new metropolitan archbishops held by Pope Francis for the Solemnity of Saint Peter and Paul at Vatican Basilica on June 29, 2013 in Vatican City, Vatican. (Photo credit: Franco Origlia/Getty Images)

On behalf of the United States Conference of Catholic Bishops, Archbishop Salvatore Cordileone, Archbishop Paul Coakley, and Bishop David Konderla recently wrote to U.S. Attorney General Bill Barr, asking him to vigorously enforce the obscenity laws. They also called upon him to launch an "investigation of pornography producers and website owners for criminality."

"The current pandemic is exacting a heavy and widespread emotional, social, and financial toll in our communities," the bishops said. They warned that "virtually unchecked proliferation of pornography fuels the demand that frequently results in commercial sexual exploitation."

The bishops also noted that today's unlimited supply of pornography "has led users to seek more and more extreme videos," the result being an uptick in trafficking, child pornography, and related problems. Finally, they raised concerns about the effects of pornography on "healthy human intimacy and relationships."

As a sociologist who has written on this subject before, I can testify that everything the bishops said is accurate; it is amply supported by the data.

Researchers from Dartmouth studied the impact that sex on the screen has on teenagers. The study was based on nearly 700 popular films, all of which featured sexual content. The psychologists concluded that the more teenagers are exposed to sex on the screen, the more likely they are to be sexually active.

Ten years ago, an eye-opening report on pornography was issued by scholars representing several religions; agnostics and atheists were also included. "The Social Costs of Pornography" concluded that today's Internet brand of pornography is qualitatively different from what was available in the past. They particularly cited the harm done to women and children, and how pornography undermines marital relationships, as well as other intimate relationships.

What the bishops said, then, was good advice. Unfortunately, not everyone is as concerned about "commercial sexual exploitation" as the bishops are. Some are even okay with hooking up online. One of those persons is Dr. Anthony Fauci.

On April 14, 2020, he was asked the following question on Snapchat's "Good Luck America."

"If you're swiping on a dating app like Tinder, or Bumble or Grindr, and you match with someone that you think is hot, and you're just kind of like, 'Maybe it's fine if this one stranger comes over.' What do you say to that person?"

"If you're willing to take the risk—and you know, everybody has their own tolerance for risks—you could figure out if you want to meet somebody." He concluded, "If you want to go a little bit more intimate, well, then that's your choice regarding a risk."

This is the same man who made a name for himself seeking to combat AIDS, so he should have learned something about the consequences of anonymous sex. Just as important, he is the same man who tells us not to shake hands with people, and to stay six feet away from each other, unless, it now appears, we are having sex with someone we met online.

The bishops make more sense. They have a more mature, and healthy, perspective about the human condition.