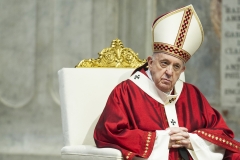 In 1973, when the Supreme Court legalized abortion in its Roe v. Wade decision, Catholics were nearly alone in their opposition to it. There were some elements in the Lutheran Church, and in the Orthodox Jewish community, who opposed it, but most Protestants and Jews supported the ruling. As a major religious group, Catholics were the only ones to speak out against it.

The 1970s saw a wholesale reversal among evangelical Protestants. Two decades ago, Richard Land, who at that time was the president of the Southern Baptist Convention's Ethics & Religious Liberty Commission, explained what happened. "Nowhere has the shift on the pro-life issue been more dramatic than among Southern Baptists."

Regarding abortion, Land said that "many [Southern Baptists] perceived it as a Catholic issue. While I was in seminary from 1969 to 1972 in New Orleans, there was no pro-life consensus among the student body or faculty." What changed them? He said that "the subsequent horror of 1.5 million abortions a year caused Southern Baptists who took biblical authority seriously to begin to re-examine what the Bible had to say about God's involvement with life in the womb from conception onward."

By the late 1970s and the early 1980s, Evangelicals had moved to the pro-life camp. It is also true that during this decade, the Republican Party, which was more closely aligned with the pro-abortion side, became pro-life, and the Democrats, who had been mostly pro-life, became activists for abortion rights. For example, both Rev. Jesse Jackson and Sen. Ted Kennedy had been staunchly pro-life at the time of Roe, but by the end of the decade they had switched to the pro-abortion side.

The Catholic Church never had to jump ship. It has always been pro-life.

Today, most mainline Protestant denominations are more enthusiastic about defending abortion rights than they were in 1973. In a recent Pew survey, 83% of Jews support abortion in all or most cases, though Orthodox Jews are mostly pro-life and certainly opposed to abortion-on-demand.

It is sad to note that President Biden and House Speaker Nancy Pelosi, both of whom identify as "devout Catholics," are champions of the most radical abortion laws and policies imaginable, putting them at odds with science, as well as the Catholic Church.

Overturning Roe v. Wade will not ban all abortions, so the fight for the life of the unborn will continue. We expect the Catholic Church will continue its noble legacy of offering alternatives to abortion, caring for the women seeking forgiveness for having an abortion, and promoting the pro-life cause from conception to natural death.