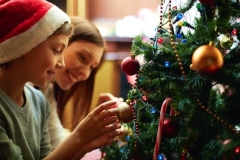 Most Christmas movies are endearing, if somewhat simple. But hardly a year goes by without some studio offering some really slimy fare. This year is no exception.

Playing off of “Silent Night,” Universal Pictures is bringing out “Violent Night” on December 2. The plot involves Santa Claus seeking to rescue a family from mercenaries. Santa is anything but gentle—he is a master of violence. According to one reviewer, the movie contains “constant harsh but bloodless violence, including gunplay, explosions, and torture, some sexual humor, a few uses of profanity...and crass language.”

The movie’s director, Tommy Wirkola, previously directed “Hansel and Gretel: Witch Hunters,” a 2013 film which was slammed for its “pervasive gory violence.” Pat Casey and Josh Miller, the script writers, have a history of dealing with violence and Christmas. They were responsible for the 2016 miniseries, “12 Deadly Days,” which centered on a cursed California town in the 12 days leading up to Christmas.

“Violent Night” is featured on Twitter, replete with violent adaptations of traditional Christmas sayings. These include: “Time for some seasons’ beatings”; “Bruises to all, and to all a good night!”; “Merry F*cking Christmas” (a Christmas tree emoji is used in place of the asterisk).

A week later, on December 9, “Christmas Bloody Christmas” debuts, streaming on Shudder (a horror streaming service owned by AMC networks). Rated “R,” the movie features a robot toy Santa that goes on a killing rampage on Christmas Eve. According to one reviewer, the film features “a backdrop of drugs, sex, metal, and violence,” including “a blood splattered battle for survival against the ruthless Saint Nick himself.”

“The Killing Tree” is another “R” rated horror movie. It was released November 1 on Amazon Prime Video & DVD. The plot involves “a scorned widow [who] casts an ancient spell to resurrect her executed husband. However, the spell goes wrong, the husband is brought back as an evil Christmas tree, hell-bent on getting revenge on the one who caused his execution.”

This movie is noted for its bloody scenes, including “bloody splatters on the camera and mauled visitors.” The film’s tagline is, “Deck the Halls with blood!”

These flicks will not garner a big audience, but they will feed the sick needs of mostly demented men who get their kicks out of such fare. The obsession with violence at Christmastime tells us a great deal about the mentality of those behind these movies. They really have a hard time dealing with the sacred, which is why they stoop to profanities.

Do yourself a favor and watch “A Christmas Carol” one more time.