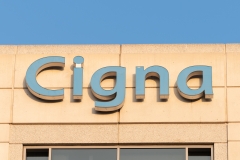 Featured is the outside of Cigna corporate offices in Glendale, Calif. (Photo credit: AaronP/Bauer/Griffin/GC Images)

The top officials at Cigna should resign immediately. They have willfully violated their own employment tenets and have adopted patently bigoted employment policies.

Cigna has a "Societal Norms" checklist that asks employees to "Check Your Privilege." Among the choices are "Christian," "White," and "Cis-Male" (meaning biological males). This would suggest that Oprah is not a member of the "privileged class," even though she is rich enough to buy Guatemala.

White males are demonized the most. Indeed, when making hiring decisions, employees at Cigna are asked to abandon their much-vaunted virtue of inclusivity: No white males need apply. White males who apply for a job are sidelined, blocked from getting the post, according to the Washington Examiner. This is obviously racist and sexist, and worthy of a massive lawsuit.

To make matters worse, Cigna lies about its discriminatory policies. One of its diversity officials recently said, "Our inclusive culture at Cigna means that we're working hard to ensure everyone feels respected, welcome, and like they belong." Really? Tell that to the white male Christians who are denied jobs because of their status. And how welcoming do Cigna staffers with this profile feel about working for a company that sees them as the enemy?

Even worse is Cigna's hypocrisy.

"Cigna takes great pride in our diverse and talented workforce," says its 2019 statement on "Diversity and Inclusion." What they do not admit is how they blatantly discriminate against women and minorities.

To top things off, of the 13 members of Cigna's board of directors, 77% are white, 15% are black and 8% are Asian; there are no Hispanics. Males make up 77% of these positions; women are 23% of the board's membership.

Cigna's executive and management team also has 13 members. Whites are 85% of the total, while blacks make up 15%; there are no Asians or Hispanics. And just as the case with the board, 77% of these jobs are held by men and 23% by women.

Given the enormous gap between what Cigna preaches about how welcoming and inclusive it is, and what its workplace composition is—to say nothing of its highest paying jobs—fairness dictates that those on the board of directors and its executive and management team resign immediately. They need to set an example. They also need to junk their racist, sexist, and anti-Christian policies.