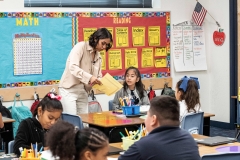 Lawyers and school officials in Connecticut are dragging their feet in the ongoing saga of Jeremy Boland, the suspended assistant principal of Cos Cob Elementary School in Greenwich who was caught on video bragging that he doesn’t hire Catholic teachers. Boland was outed in August by Project Veritas and his case is still open. We have written to many state officials registering our outrage about Boland and the need to fire him.

A news story from greenwichfreepress.com on January 22 said that on January 19, Joe Kelly, the chairman of the Board of Education, said he would ask the superintendent for an update on the Boland matter. It was learned that there are five investigations under way: Greenwich Schools, Town of Greenwich, Attorney General’s office, Commission on Human Rights and Opportunities, and the State of Connecticut Education Department; the Town probe is just getting started.

The superintendent of Greenwich Schools, Dr. Toni Jones, explained why this case is dragging on. “Any time you have a termination hearing, they are very lengthy, very time consuming for all of you. And they are very expensive. You need attorneys on the table. You need hearing officers. Investing a half a million dollars to go to a termination hearing—because you don’t know what the results will be.”

Jones made a revealing comment when she said, “we’re trying to protect the interests of the district and make sure that investigations are very thorough.”

Boland made it clear that “…if they’re Catholic—conservative…You don’t hire them.” He added, “If someone is raised hardcore Catholic, it’s like, they’re brainwashed—you can never change their mindset.”

Now what if he said, “…if they’re Jewish—liberal… You don’t hire them. If someone is raised hardcore Jewish, it’s like, they’re brainwashed—you can never change their mindset”?

Would they still be dragging their feet if this is what Boland said? What if it were a Muslim conservative who was the target of his venom? Would they still be investigating? And one more thing: School officials have no business trying to change the “mindset” of teachers whose views they dislike. The purpose of education is to educate—not indoctrinate.

Previously, Greenwich school officials tried to make Project Veritas the bad guys, and now they are worried about the best interests of the school district.

In addition to seeing that justice is done to Boland, they need to root out anti-Catholic bigotry from all their schools. If he was that casual in admitting to his bigotry, there may be others who harbor an animus against conservative Catholics. Where is that probe?