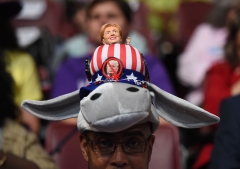 A Hillary Clinton supporter wears a donkey hat with a Hillary doll on Day 3 of the Democratic National Convention at the Wells Fargo Center, July 27, 2016 in Philadelphia, Penn. (Photo credit: TIMOTHY A. CLARY/AFP via Getty Images)

Every survey in the last few decades shows that agnostics, atheists, and those with no religious affiliation have set anchor in the Democratic Party. By contrast, religious Americans are overwhelmingly Republican.

The events at the Democratic National Convention (DNC) only made matters worse; a subsequent news story on this subject has now added more fuel to the fire.

Last week, Linda Sarsour, an activist accused of anti-Semitic and anti-Israel views, spoke at the DNC. Why she was invited, when her hateful views are well-known, does not speak well for the Biden-Harris camp. After word leaked out about Sarsour's participation in a council meeting, Biden spokesman Andrew Bates moved quickly to put an end to the controversy. He said Biden "obviously condemns her views."

However, after what recently happened, it is far from obvious that Biden "condemns her views."

On Sunday, the Biden campaign privately apologized to Sarsour. It expressed dismay over "the pain" that Arabs and Muslims allegedly felt when she was condemned. Coalitions director Ashley Allison told Sarsour "I am sorry that that happened." Tony Blinken, a foreign policy advisor to Biden, said "my apologies for what we did and what happened."

So whose side is Biden on? This issue is further complicated when we consider that his running mate, Kamala Harris, has a similar problem with Catholics.

Harris has never apologized for her anti-Catholic attack on Brian Buescher, a federal district court nominee. In 2018, she went on the offensive against him because he belongs to a Catholic organization, one that is known for its adherence to the teachings of the Catholic Church on abortion. In effect, she invoked a religious test for the bench, something that is constitutionally prohibited.

The faithful were slapped in the face last week when the Muslim Delegates and Allies Assembly (which Sarsour participated in) deleted the words "under God" when they recited the Pledge of Allegiance. This was not an anomaly. The LGBTQ Caucus did the same.

Omitting reference to God is nothing new to Democrats. In 2012, the DNC threw God out: all references to God that were included in previous platforms were excised. After a public relations embarrassment, God was reinserted. President Obama, who approved the platform, had to personally intervene to make the revision.

Speaking of Obama, in 2010 he could not bring himself to utter the words "In God We Trust" when speaking in Indonesia about our national motto; instead, he substituted "E Pluribus Unum." Five years later at the Congressional Hispanic Caucus Institute's 33rd Annual Awards, the president never referenced God, or the "Creator," when citing the Declaration of Independence.

We heard much last week about Biden being a "man of faith." Let's say he is. Good for him. But what about the rest of us? What specific religious liberty policies does he support? Why is his campaign silent on this issue? Moreover, the Democratic Party platform has only six references to religion. It has 32 references to the LGBTQ agenda.

Taken together, all of these issues have the effect of telling religious Americans that they can "get lost." What other conclusion are we to come to?