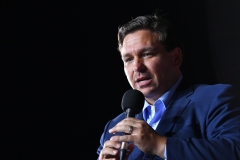 Florida Gov. Ron DeSantis earned the admiration of fathers and mothers when he signed the Parental Rights in Education bill. Their rights have been slipping away, not only in Florida but throughout the nation, as sex-crazed activists, school administrators, and teachers have sought to supplant them, making unauthorized and damaging decisions affecting their children.

Most people have never read the bill. If they listened to those branding it the "Don't Say Gay" bill, they would think it is a hate speech bill. This is a total lie.

To begin with, the following terms never appear in the legislation: heterosexual, homosexual, straight, gay, bisexual, intersex, non-binary, and transgender (the last three categories are a fiction — they don't exist in real life). The bill is about parental rights. It is also about protecting children from sexual engineers, namely those who treat kids as though they were a toy that they can play with to further their own agenda.

Here are some of the highlights of the bill:

Who could possibly object to these standards of common sense and common decency? (Most of the following comments were made prior to the bill's passage.)

President Biden called the bill "hateful." Disney said it "should never have passed and should never have been signed into law." Oscar hosts slammed it, jumping and screaming, "gay, gay, gay."

Ana Navarro whined that "the message it sends is a very chilling one for LGBTQ families." Whoopi Goldberg said the bill is "shaming" queers and "punishing" teachers. Andy Cohen labeled it "one big dog whistle" that is "scaring people into spewing hate and discrimination at the LGBTQ community."

The Human Rights Campaign complained that "LGBTQ+ students may wonder if they're allowed to even acknowledge their own sexuality or gender identity." Nadine Smith from Equality Florida charged that DeSantis "attacked parents and children in our state by invoking hateful anti-LGBTQ stereotypes."

Lambda Legal blasted the bill for giving "the 'green light' to teach intolerance, allow harassment, and fail to confront violence against LGBTQ+ youth and their families."

An editorial in the Washington Post said proponents of the bill "invoke the bogeyman of school systems infringing on 'parental rights,' arguing that such conversations should be led by parents and families."

Kara Swisher, a New York Times opinion writer, said, "Let's call it what it is, trans- and homophobia."

Robin Maril at Slate blamed insecure politicians who "rely on religiously based divisive messaging because it works. The theology of autocracy, meanwhile, uses the mantel of the church to promote nationalistic conformity while also channeling fear and anger toward communities that can't or won't conform."

This is the kind of hysteria we have come to expect from left-wing sources.

There is nothing "hateful" about the bill. It does not "shame" queers or "punish" teachers. Nor are LGBT parents and children in any way "attacked" by the legislation. The curriculum does not teach intolerance, never mind "fail to confront violence" against anyone. Nor is there anything "phobic" about the bill. And it certainly has nothing to do with promoting the "theology of autocracy," whatever that is.

Best of all is the Washington Post's mention of "parental rights." News Flash: There is nothing so-called about the rights of parents — they exist — and there is nothing debatable about contemporary assaults on them.

Kudos to Gov. DeSantis. He speaks for Americans way beyond Florida, including most practicing Catholics.