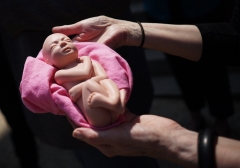 All abortions are tragic, both for the pregnant woman and her baby, but most pro-life people do not lump all women who have had an abortion together, treating them all the same. For example, while we cannot condone it, most understand that a 15-year-old girl who becomes pregnant, and is fearful of telling her drunken and violent dad about it, may elect to have an abortion. They are less understanding of women who have had multiple abortions.

This week on "The View," Whoopi Goldberg said, "Getting an abortion is not easy. Making the decision is not easy. It's not something people do lightly." Who can argue with that? What's strange about her comment, however, is that she has admitted to having six or seven abortions by the age of 25. Six or seven — she's not sure.

If the decision to abort a baby is "not easy," it appears to become easier for those who have another. That's a serious problem which the media do not cover.

In 2008, 50% of all abortions were done on women who had a prior one. The most recent figure is 45%. This is an enigma. Why would approximately half of all women who have had an abortion go to a clinic again and again?

Abby Johnson, who was a director at a Planned Parenthood clinic in Texas, described how "Angie," a recidivist, spoke to clinic personnel. "'Could y'all just Xerox my chart and I'll fill in the dates?' She would jest. Once the paperwork was in order, Angie would attempt to banter with the girls in the waiting room. 'It's no big thing,' she assured them. 'I've done it eight times before, and I have no regrets.'"

Irene Vilar's mother committed suicide when she was eight-years-old; her brothers were heroin addicts. When she was a teenager she married a tyrannical 50-year-old professor. She wound up having 15 abortions in 16 years, admitting that women who have had multiple abortions show a certain "recklessness." She was 15 times reckless.

"Mary" had three abortions when she was in her early twenties. After she was pregnant the third time, she wanted to have the baby but her boyfriend did not, so she had an abortion. "I felt like we were committing murder, that I was killing something I wanted."

Dr. E. Joanne Angelo knows what Mary was going through. She is associated with Project Rachel, a Catholic support group that ministers to women — of any faith — who have had an abortion, and are seeking reconciliation. "When a woman finds herself pregnant in a crisis situation, she immediately calculates the date when her child would be born," she says.

"After the abortion, she may feel numb, her grief over the death of her child being blunted by her strong ambivalent feelings — her tender feelings for her child, and the defensive denial of these feelings which enabled her to submit to the abortion procedure," Angelo writes. She further observes that "her inner life is often plagued by guilt and shame, nightmares of babies being sucked down tubes or dying in horrific accidents or violent crimes." Some women "may become seriously depressed and even suicidal."

If, as it appears likely, Roe v. Wade will be overturned, the problem of  women having multiple abortions will not go away. There needs to be more aggressive intervention on the part of the medical community and the clergy after a woman has had an abortion for the first time.

We need to end the enigma of multiple abortions. That also means we need to be just as aggressive in dealing with the impregnating men. They've gotten away with their irresponsible behavior for too long.