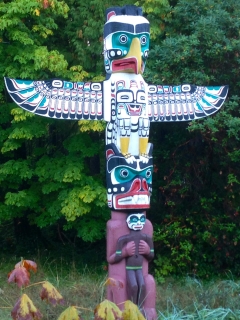 Totem pole of a thunderbird stands tall and at the ready in Stanley Park, Vancouver, BC, Canada. (Getty Images)

There has been much recent discussion about the Report of the Truth and Reconciliation Commission of Canada. It found that 150,000 Indigenous children were taken from their homes and forced to attend schools that would assimilate them into the dominant culture.

It was the Canadian government that made the decision to suppress the culture of Indigenous persons, sending children to residential schools operated by the government, Catholic religious orders, and Protestant denominations.

The majority of the schools were not run by Catholics.

The central criticism of these arrangements holds that Canada's policy of forced assimilation resulted in "cultural genocide." In essence, government leaders destroyed the culture of Indigenous persons, imposing on them Western norms and values.

When Pope Francis was in Canada, he was highly critical of the residential schools, but he never used the term "cultural genocide." When returning to Rome, he was asked about this on the papal plane.

Brittany Hobson of the Canadian Press mentioned that the Report "described the residential school system as 'cultural genocide,'" and asked him why he didn't call it that. Before he could answer, she made an important qualification. "This has since been amended to just 'genocide.'"

The pope replied that "it didn't come to mind, but I described it. It is true; yes, it's genocide."

Who did the amending? How did "cultural genocide" become  "genocide"? Those who wrote the Report? The government? The media? Activists? Are we now to believe—she succeeded in entrapping the pope—that the residential schools were genocidal?

"Despite the coercive measures that the government adopted, it failed to achieve its policy goals. Although Aboriginal peoples and cultures have been badly damaged, they continue to exist." That is a true statement and it undercuts what was said on p. 1 about residential schools being an example of "cultural genocide." True genocides allow for few, if any, survivors.

The Report accurately notes that "The residential school system was based on an assumption that European civilization and Christian religions were superior to Aboriginal culture, which was seen as being savage and brutal." Without justifying anything the schools did, there were very good reasons for thinking this way.

Charles Murray tallied approximately four thousand first-time accomplishments in history. He found that nearly 100 percent of the scientific and technological breakthroughs in history originated in Europe or North America. He came to the conclusion, which he did not anticipate, that the key to understanding this phenomenon is Christianity.

What Murray said is incontestable, making absurd the statement in the Report that "there is no hierarchy of societies." This is morally and historically indefensible. Are we to believe there is no difference between a society run by Norwegians and one run by Nazis?

In his book, Genocide, historian William D. Rubenstein writes that "Genocide is normally carried out against an ethnic or religious minority, and entails the deliberate killing of most or all members of a collective group for the mere fact of being a member of that group."

The Report cites not a single person who was killed in the residential schools. So where was the genocide? There are two testimonials about killing in the 535-page Report. One was made by an Indigenous woman who said she witnessed her older brother kill one of her other brothers when she was nine.

The other cites a 2014 document that claims that "1,017 Aboriginal women and girls were killed and 164 were missing." If this is genocide, then it has nothing to do with the residential schools. These killings took place between 1980 and 2012. The residential schools were closed in 1969.

If the residential schools were guilty of genocide, surely the Report would find instances of torture, if not whipping. But no incidents of torture were cited. One instance of whipping was mentioned and it was committed by a government teacher in 1895.

Did the children suffer from hunger or starvation? Two incidents of hunger are noted, one in an Anglican school and the other in a government school. There is one mention of starvation, and it was attributed to the federal government. The one testimonial on molestation cites a girl who was molested by older girls in a hostel.

Rubenstein notes that between 1910 and 1970, the Australian government acted in a similar fashion toward Aboriginal children. It may have been unethical, but it does not qualify as genocide.

If we don't distinguish between cultural imperialism and cultural genocide—never mind "genocide"—we are belittling what happened to Jews in Hitler's Germany. We need to stop with the drama and the hyperbole—there was no genocide, cultural or otherwise, in the Canadian residential schools.