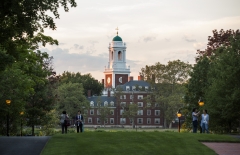 Slavery has existed in every part of the world, and it was rarely considered to be morally wrong until Christianity condemned it. In fact, when the U.S. was founded in the late 18th century, Western Europe was the only place in the world where slavery did not exist.

It is ironic to note that white people today feel obliged to provide reparations to black people when white people were the first to object to slavery. They sure didn't object in Latin America, Africa, the Middle East, or Asia — they thought it was normal.

Harvard University is the latest institution to offer its mea culpa, this time with a pledge to spend $100 million of its $53 billion endowment on an endowed "Legacy of Slavery Fund." No money will go to any individuals. The money will pay for memorials and curricula to honor the past and for exchange programs between Harvard and black colleges, as well as other ventures.

Tomiko Brown-Nagin is the professor who is leading a committee on this project. "The university is committed to deeply meaningful and sustained remedies that will endure in perpetuity," she said. "These remedies are focused on leveraging our expertise in education, which is consistent with our mission."

If the committee is serious, it should endorse charter schools. Charter schools are public schools that are privately run, and they are a smashing success. Black parents love them, precisely because traditional public schools have failed them for decades.

If the committee is serious, it should endorse school choice initiatives, programs which black parents also love. School choice would give these parents the right to send their children to a private or parochial school, places that have a proven record of academic excellence.

If the committee is serious, it should break with the Harvard Graduate Council, which represents 12 Harvard graduate and professional schools. The Council supports Black Lives Matter, a racist and corrupt organization that seeks to punish blacks by destroying the nuclear family. It also wants to defund the police, a policy overwhelmingly rejected by blacks.

If the committee is serious, it should stop segregating the races by having black graduation ceremonies and the like.

If the committee is serious, it should start treating people of all races and ethnicities as equal and stop discriminating against Asians in its admissions policy.

Grandstanding and chest-beating exercises are the cheapest way to address this issue. Why not finally do something that will really provide "meaningful and sustained remedies that will endure in perpetuity"? Why not support education reforms that gives blacks the same opportunities available to affluent whites?