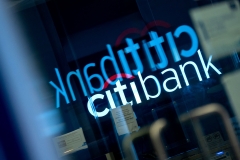 The Citibank logo is reflected in a window in Washington, D.C. (Photo credit: STEFANI REYNOLDS/AFP via Getty Images)

Abortion is a contentious subject, one that doesn't need to be further polarized, and certainly not by the business community. It doesn't make any difference if a corporation wants to dive into this on the pro-life side or the pro-abortion side — it is none of their business. Yet some members of the ruling class can't resist doing so. Not surprisingly, they are on the pro-abortion side.

After some states recently passed restrictive abortion laws, most notably in Texas, Citigroup (Citi for short) decided to finance abortions for women seeking to abort their child out-of-state. In March, it told its shareholders, who will meet April 26, what the new policy entails. "In response to changes in reproductive healthcare laws in certain states in the U.S., beginning in 2022 we provide travel benefits to facilitate access to adequate resources."

To be specific, Citi has agreed to pay the airfare and hotel expenses for women seeking an abortion; it can be done at any time of gestation and for any reason whatsoever. It did not say whether it would pay for their restaurant bills or their take-out orders.

Citi is a multinational investment bank that has a fiduciary obligation to its shareholders. This new abortion policy obviously violates that trust: investors buy stocks so they can maximize their returns, not to subsidize the political preferences of the corporate elite.

What if the woman contemplating an abortion were to change her mind at the last minute? Does she have to reimburse Citi for the expenses she incurred? Will Citi leave her stranded out-of-state if she balks?

The time has come for Citi employees who oppose this policy to sabotage it. Here's the game plan.

Citi already pays the medical bills for men and women who think they can "transition" to the other sex. The time has come for one of the male employees in Texas — Citi has 8,500 employees in the Lone Star State — to claim he is pregnant and wants to abort his child out-of-state. If Citi won't pick up the tab, he should sue for discrimination.

The madness of transgenderism continues to mount. That it is being underwritten by the ruling class makes it all the more invidious.