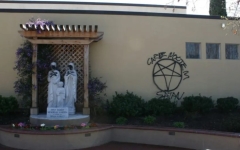 The recent flurry of anti-Catholic incidents at home and abroad is a disturbing reminder of how deeply entrenched this genre of bigotry is. The incidents are not in any way a coordinated attack, though some commonalities are evident, the most obvious being that they are all driven by left-wing players.

It was reported in Canada last week that there has been a huge increase in anti-Catholic hate crimes: between 2020 and 2021, they shot up by 260 percent. Churches have been burned to the ground, stained-glass windows have been smashed and acts of desecration have taken place.

Some of this is a reaction to news reports alleging the discovery of "mass graves" of Indigenous children on Catholic grounds. Those stories have been proven to be totally false—not a single corpse has been found in these "mass graves." But the damage that these lies have caused is considerable.

Communist countries have a long history of plundering the Catholic Church, which is why recent anti-Catholic incidents in China and Nicaragua come as no surprise. In both cases, the offenses were launched as a payback against those who challenged the authorities.

When House Speaker Nancy Pelosi visited Taiwan, over the objections of the Chinese Communist Party, she became the object of scorn. The Chinese Embassy in France tweeted a political cartoon that showed a witchlike picture of Pelosi crowned with a ring of stars, resembling Our Blessed Mother. She was shown trying to steal a baby from its crib, an apparent reference to her wanting to steal Taiwan from China.

The Communist regime in Nicaragua has taken aim at Bishop Rolando Álvarez of the diocese of Matagalpa. According to Thomas D. Williams, he is a vocal opponent of Nicaraguan dictator Daniel Ortega, and for that he has been subjected to harassment. He has been denied entrance to his church. The riot police have closed off the road outside his house, forcing him to say Mass at his residence.

In the United States, pro-abortion protesters crashed a big Catholic event in California. The Napa Institute held a conference that attracted demonstrators who interrupted the proceedings screaming, "Get your rosaries off our ovaries." When those in attendance drowned them out by singing "Salve Regina," they left.

On August 6, pro-abortion protesters showed up at the Basilica of St. Patrick's Old Cathedral in downtown New York City. At least five were arrested for harassing church-goers.

Many are responsible for fueling these incidents, and this includes those who affect the pop culture. Bill Maher showcased his anti-Catholic bigotry on Friday when he once again smeared homosexual priests for molesting minors.

Worse are those in a position to do something about these offenses. In June I wrote to U.S. Attorney General Merrick Garland asking for his intervention in dealing with domestic terrorists who have attacked Catholic churches and crisis pregnancy centers. He has done absolutely nothing to combat these incidents.

Bigotry against any demographic group, religious or secular, should be condemned by everyone. Regrettably, members of the ruling class appear to be selectively interested in doing so.