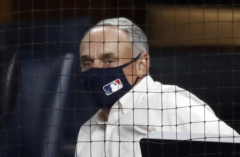 As president of the nation's largest Catholic civil rights organization, I would like to commend you for your new-found interest in policing human rights in the United States. While your objections to the voting reform law in Georgia are baseless, let's assume nonetheless that you have a genuine interest in alleged violations of human rights.

However, if that is the case, why did MLB just renew its contract with Tencent, the Chinese company with close ties to the Communist Party?

According to chinanews.com, the Chinese State Media, the new contract will enable MLB and the communists to expand live broadcasts and membership services. "For the first time, it [MLB] has joined hands with Oriental Pearl New Media, and it is the first time that MLB has achieved multi-platform copyright cooperation in China, allowing baseball content to cover 100 million household users." Baseball will also be shown on screens in bus terminals and subways. There will be at least one game aired per day, with approximately 200 games available for live broadcast and on-demand services.

You must be very proud of MLB's expansion into Communist China. After all, the Chinese people need some relief from the totalitarian conditions under which they live, and this is particularly true of those who take their religion seriously. Unfortunately, their rights are being summarily abused by the government that you support.

Religious persecution in China is at obscene levels. Freedom House, a well-respected organization that monitors human rights around the world, details the desecration of places of worship, torture and murder of religious Chinese people by the state. Worse, religious prisoners of conscience are the largest contingent of prisoners in China.

The Chinese communists have engaged in genocide against the Uyghurs,  a Muslim ethnic minority. That was the conclusion of the United States government in 2021. Upwards of two million have had their religious rights decimated; they have also been subjected to forced labor and forced sterilizations. According to the Council on Foreign Relations, torture is common in the "reeducation" camps, and reports of women being sexually abused and raped are ongoing.

Catholics and Protestants have had their churches raided and stripped of crosses. They are forbidden from having their own independent clergy, forced to accept communist-chosen priests, bishops, and ministers. Christmas is practically forbidden, and Catholics and Protestants have had to post images of Xi Jinping, the tyrant who runs the Communist Party.

Buddhists and members of the Falun Gong are also persecuted. The U.S. Commission on International Religious Freedom has detailed how Buddhist monks and nuns who refuse to denounce the Dali Lama are expelled from their monasteries, imprisoned, and tortured. Practitioners of Falun Gong have had their organs harvested in prison.

Where does this leave us? To be specific, could you please explain how you can aid and abet genocide in Communist China while boycotting Georgia over a non-issue? Does it all come down to making money and sucking up to left-wing activists? If so, what does that make you, Mr. Manfred?

I will be only too happy to alert Catholics, and many others, to your compromised status. More than that, I will ask everyone not to watch the All-Star game on July 13th. Yes, MLB will get its revenue, no matter what, but if there is a dramatic drop in TV ratings—and it is a sure bet there will be—that message will not be lost on anyone. It may even set the stage for a loss of revenue in next year's All-Star game.

The Catholic League for Religious and Civil Rights