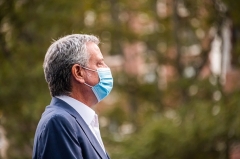 It is one of history's greatest ironies: No segment of society punishes the poor more than those who champion their cause.

This is true historically in nations claimed by Marxism, and in democratic nations today claimed by liberalism. Rhetoric aside, the left always screws the poor. The latest Marxist to do so, in a democratic country no less, is New York City Mayor Bill de Blasio.

De Blasio recently announced that the way to help the poor do better in school is to hike taxes on the rich. He said "our mission is to redistribute wealth" and to close the "COVID achievement gap."

The man is clueless. Owing to absurdly high taxes, the rich are leaving New York in droves; taxing them at an even higher rate will only encourage more to leave. They are taking their tax contributions and their jobs with them.

What makes for student success is the family, not the schools. Asians are "people of color," yet they have no problem succeeding in school. That's because, unlike African Americans, the typical Asian family has a father and a mother at home.

So the "color" argument that de Blasio favors—structural racism is holding blacks back—is completely false. Black kids from two-parent families are not failing in school. The real issue is the family, not race.

That said, it is not as though schools don't matter at all, it's just that they are of secondary importance. If de Blasio really wanted poor kids to succeed in school, he would spend money on charter schools, provide scholarships to private schools, endorse school choice, and allow the poor to enroll in Catholic schools. Instead, he fights every initiative that works. To top things off, he is the one who opens and shuts the schools like a madman, thus exacerbating the "COVID achievement gap" he claims to bemoan.

Playing Robin Hood drives the rich out of New York, shrinks the tax base, and does nothing to help the poor succeed in school. De Blasio is a three time loser, all in the name of championing their cause.

(Bill Donohue has been president of the Catholic League in the United States since 1993.)