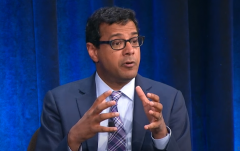 Atul Gawande discusses his book "Being Mortal: Medicine and What Matters in the End." (Photo credit: YouTube/Talks at Google)

If credentials were sufficient grounds for holding a position in the Biden Administration, Atul Gawande would merit a unanimous vote. He is a Professor of Surgery at Harvard Medical School, a graduate of Harvard Medical School, a Rhodes Scholar, a distinguished author, and the former CEO of a healthcare organization. This is surely why President Biden has nominated him to be assistant administrator of the Bureau for Global Health at the U.S. Agency for International Development.

There are very good reasons, however, why Sen. Marco Rubio (R-FL) sounded the alarm on Gawande. He is a defender of infanticide, a reflection, no doubt, of his crass utilitarian philosophy. In short, credentials, no matter how stellar, tell us nothing about the ethics of the person.

Rubio, who sits on the Senate Foreign Relations Committee, centers his objection to Gawande on a 1998 essay he wrote for Slate, the left-wing media outlet. It was a full-throated defense of partial-birth abortion.

"The fetus is delivered feet first. To get the large head out, the doctor cuts open a hole at the base of the fetus's skull and inserts tubing to suck out the brain, which collapses the skull. Often, but not always, the fetus is injected lethally beforehand."

Gawande knows how normal people react to this monstrous procedure, and he has a ready answer for them:

"If partial-birth abortion is too gruesome to allow, however, it is hard to see how other late abortions, especially D and Es [dilatation and evacuation], are any different."

He's right about that.

"About 80 percent of late-term abortions are done by D and E. A couple of days ahead, small, absorbent rods are put in the pregnant woman's cervical opening to expand it gradually. Then, for the actual procedure, she—and the fetus—are given heavy sedation or general anesthesia. The doctor breaks her bag of water and drains out the fluid. The opening won't let the fetus out whole. So the doctor uses metal tongs, physically crushes the head, and dismembers the fetus. The pieces are pulled out and counted to confirm that nothing was missed."

Not even a toe.

Gawande speaks with clinical detachment about the most Nazi-like practices.

"What makes abortion disturbing is that the fetus is big now—like a fully formed child. Two of my obstetrician friends, both strongly pro-choice, told me that, even when it is a mother's life at stake and abortion is absolutely necessary, doing the D and E feels 'horrible.' We imagine, as we look in the fetus's eyes, that there is someone in there."

Imagine that. A big unborn child, who `miraculously resembles a "fully formed child," inspires those who look into his eyes that there really is someone there!

Hooman Noorchashm is an M.D. who also holds a Ph.D. He worked with Gawande at Brigham and Women's Hospital (BWH), a Harvard-affiliated entity, in Boston. On Dec. 11, 2018, he wrote a letter to Gawande commenting on his appointment as the new CEO of Haven Healthcare.

Noorchashm raked Gawande over the coals for going mute on a serious scandal that took place at the hospital when they worked there. A surgical tool was used during hysterectomies that spread a dangerous cancer in some of the hospital's patients.

The device is called a morcellator. It is used to cut up and remove tissue to treat fibroids. While these growths are usually benign, they sometimes cannot be detected before surgery. As described by the Wall Street Journal, which covered the scandal, "Morcellation can send pieces of malignant tissue into other parts of the abdomen, significantly reducing a woman's chance of long-term survival, the FDA said." One of the women treated at BWH died after a hysterectomy with morcellation in 2012. She was 52.

When Noorchashm spoke to Gawande about this issue, he was struck by his cowardly silence. What makes this so disturbing is that Gawande has a reputation as the guardian of public safety. Moreover, he was fully aware of a critical analysis of what was going on at BWH.

Noorchashm said in his letter to him that "you failed to rise up, at all, to defend a surgical and ethical critique and position [of this dangerous operation] you knew was absolutely correct—I know that your silence was for the sake of internal politics, or perhaps it was because of the ethically imbalanced utilitarian philosophy your writings seem to promote."

Noorshashm didn't mince words. "Maybe you too believe that the majority benefit and cost/revenue advantages somehow justified the minority subset of women whose cancers were being spread and upstaged by GYNs using their 'meat-grinders' through small holes."

Surely the Biden Administration can find someone who has a more humane record than Gawande. It does not exaggerate to say that he is a direct threat to public safety.