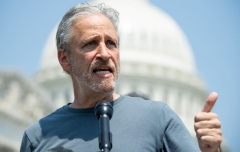 Actor and comedian Jon Stewart speaks during a press conference by members of the U.S. House. (Photo credit: SAUL LOEB/AFP via Getty Images)

It seems everything about Jon Stewart is phony. His real name is Jonathan Stuart Leibowitz. He rails against "white privilege" yet he enjoys a net worth of at least $120 million. He hates white people who make racist comments about black people yet he is known to make racist cracks about blacks. He proclaims tolerance for everyone yet his serial hate speech directed at Catholics proves otherwise. Now he is libeling Andrew Sullivan, suggesting that the writer is a white racist.

In a recent episode of "The Problem With Jon Stewart," the host featured a panel discussion on white racism, one of the most popular topics these days for white people who feel guilty about being white. Two of his guests, both white, agreed with him that America is irredeemably racist, but Andrew Sullivan, the Irish immigrant writer, disagreed.

Sullivan is a lot brighter than Stewart, so it was not hard for him to make the host look like a fool.

"America in 2022 is the most multiracial, multicultural, tolerant, diverse melting pot that has ever existed on planet Earth, and there is no other place on Earth even like it. That's why 86 percent of our immigrants are non-white. Do you think they want to come to a white supremacist country?"

Stewart was tongue-tied. He couldn't offer a riposte so he settled on making a throw-away comment about blacks being brought here as slaves. He couldn't even get that right. No, blacks were not "kidnapped" — the whites bought slaves from their African slavemasters. More important, Stewart depicted Sullivan as a white racist.

Stewart is no virgin. In 2008, before he came on stage for his "Daily Show," a comedian warmed up the crowd. He picked on a black couple in the audience, making racist remarks about their sex life. Alison Kinney, an Asian writer, was there, and in 2014 she wrote about what happened.

Stewart had a few exchanges with the audience before the show started. Kinney asked, "Why does your warm-up comedian use ethnic humor?" Here is how she characterized Stewart's response. "Stewart's face creased with annoyance. He said, shortly, loudly, glaring at me, 'BECAUSE. IT'S. F***ING. FUNNY.'"

In 2015, a black former writer for Stewart, Wyatt Cenac, was upset about  a racist voice impression that Stewart did of presidential candidate Herman Cain. According to the Hollywood Reporter, when Cenac complained, "Stewart blew up at him in front of the entire 'Daily Show' staff." Cenac suggested he was the only black writer in the room and it made him feel uneasy.

Then Cenac brought the issue up again at a writer's meeting. He recalled that Stewart got "riled up," becoming "incredibly defensive." Stewart stood up screaming "F*** off. I'm done with you." He then "stormed out."

Cenac said that this incident caused him to have an emotional breakdown.

According to Stewart's position today, it was his white racist tirade that led to this black man's collapse. Is he going to make reparations? Maybe by ridding himself of some of his stash, he can shed some of his white guilt.

Stewart's visceral hatred of Catholics requires him to do much more than make reparations. Here's a sample of his hate speech.

None of these cruel statements can compare with what Stewart did on his April 16, 2012 show. It was so obscene that I wrote an ad about it titled, "Jon Stewart's Legacy." Here is the first paragraph from the May 21, 2012 ad in the New York Times.

"Five weeks ago today, Jon Stewart did something that will forever stain his legacy. After making fun of Fox News for not addressing the 'war on women,' Stewart said, 'Maybe women could protect their reproductive organs from unwanted medical intrusions with vagina mangers.' On the screen behind him was the picture of a naked women with her legs spread and a nativity scene ornament in between. How ironic that in the name of defending women, he grossly degraded them, while also insulting Christian sensibilities."

Jon Stewart has no moral authority to lecture Andrew Sullivan, or anyone else, about their alleged bigotry. He has proven to be the Master of Bigotry, many times over.