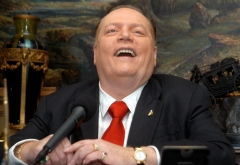 Freedom of speech, which is enshrined in the First Amendment, was never meant by the Founders to be an end in itself. It was meant to be a means to an end, the end being the good society. Without robust political speech, where different points of view could be weighed, the prospects of achieving life, liberty, and the pursuit of happiness would be diminished. Flynt spent his entire life exploiting free speech, not exercising it.

Madison, who wrote the First Amendment, would not regard Flynt as a free speech hero. He wisely observed that "liberty may be endangered by the abuses of liberty as well as the abuses of power." Flynt was a master of abusing liberty.

The prospects for the good society are not advanced when naked women are depicted upside down being shoved into a meat grinder. Flynt's pride and joy, Hustler, opined, "Prime. Last All Meat Issue. Grade 'A' Pink."

Pictures of women being raped and tortured, being subjected to bestiality, nailed to a cross, bagged like a deer and bound to a luggage rack—these were all featured in Hustler. The editors knew what they were doing. Showing women crawling at the end of a leash sent an unmistakable message to sick men. To put on its cover a photo of a woman's head in a gift box is not a demonstration of free speech; rather, it is an example of its perversion.

What is striking about all the pundits celebrating the free-speech heroics of Flynt is that it is occurring at the same time that his admirers are championing the cancel culture. What they want cancelled is not child pornography: They want to censor political speech, the very heart of the free speech provision in the First Amendment.

The New York Times ran a column this week by Nicholas Kristof titled, "Can We Put Fox News on Trial With Trump?" Similarly, it published a news story, "How Right-Wing Radio Stoked Anger Before the Capitol Siege." No one beats Max Boot at the Washington Post. His article, "Sadly, Fox News Can't Be Impeached," is a clarion call for censorship.

Here's the bottom line. According to the conventional wisdom, as outlined by today's deep thinkers, a free society should not tolerate Rush Limbaugh but it should celebrate Larry Flynt. That is about as good a measure there is to prove how morally debased we have become.