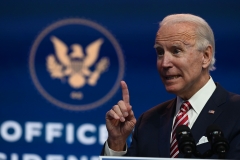 White people, in general, have a difficult time defending themselves against racist comments. That's too bad because their reticence begets more attacks on them.

In his inaugural address, Joe Biden singled out white supremacy as a force to be reckoned with. He did not define what he meant by this term, nor did he offer any examples, though many reporters noted that he was referring to the Jan. 6 Capitol riot.

David Horowitz slammed Biden's remark as a "monstrous lie." The evidence supports him.

Christian Picciolini was a leader in the skinhead movement for a quarter-century, so he should know who the white supremacists are: "It's the average American. It is our mechanics, it's our dentists, it's our teachers, lawyers, doctors, nurses and unfortunately that's the way it's turned into the last 30 years."

What is really unfortunate is the bigoted swipe at virtually every white person. If what he said were true, then, to take one index, we should expect that the rate of violent crimes committed by whites to be very high, but it isn't. That's because the "average American" is not a white supremacist.

New York Times columnist Charles Blow is also guilty of making wild generalizations. In his Monday piece, he says that the latest census figures are "terrifying" for "white nationalists." He does not explain who these people are, nor does he provide a scintilla of evidence that the "white power acolytes"—whoever they are—are terrified about the census.

The Anti-Defamation League (ADL), which was founded to combat anti-Semitism but has more recently evolved into a left-wing activist organization, is leading the way with charges of white supremacy killings. It offers as an example of white supremacist violence the shootings at a Parkland, Fla. high school, the Tree of Life synagogue killings in Pittsburgh, the shootings at the Poway Chabad in California, and a violent attack at a Walmart in El Paso, Texas.

The ADL's analysis is sophomoric and misleading.

Nikolas Cruz, 22, killed 17 and wounded 17 others at Marjory Stoneman Douglas High School in Parkland in 2018. He had been expelled from the school for disciplinary reasons and was a known racist, but he was not active in white supremacist organizations. When he was jailed, he attacked an officer.

In 2019, Robert Bowers entered the Tree of Life Synagogue and yelled "All Jews must die" as he opened fire on the congregants. When the National Council of Jewish Women issued a statement about the deadliest attack on the Jewish community in American history, they cited his anti-Semitism but said not a word about him being a white supremacist.

The Poway synagogue shootings in 2019 were committed by John Earnest, a young man who hated Jews and Muslims. The San Diego ex-nurse, who killed one woman, had no criminal record and had no connection to any white supremacist group.

Patrick Crusius killed 22 people at a Walmart in El Paso in 2019. He said his target was "Mexicans." He was known for his anti-Mexican rants and most of those whom he killed had Spanish surnames.

These four tragedies were the work of very sick men, all of whom were bigots. But if we are to call every white racist shooter a white supremacist—when there is no evidence of ties to any such group—then we are not dealing with reality. Klansmen are white supremacists, and they are not your "average American."

To be sure, there are violent white supremacists, but to slap the label "white supremacist" on every white bigoted thug is positively absurd. Those who do so are furthering a political agenda, and are not interested in telling the truth.