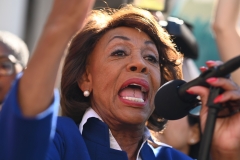 Over the past year, there has been an explosion in anti-police rhetoric and behavior, much of it violent. Indeed, the cops are under siege in many American cities. Now Rep. Maxine Waters (D-CA) has thrown gas on the fire. Her goal is to racially divide America, targeting the police as enemy number one.

Waters, whose district is in California, traveled to Minneapolis on Saturday to insist that Derek Chauvin must be found guilty of murdering George Floyd (the former police officer is not being charged with first-degree murder).

Everyone knew what she meant.

To understand the serious nature of Waters' remarks, her comments must be taken in context. The police have been continuously demonized by celebrities, pundits, and politicians.

Hollywood star Alyssa Milano recently charged, "Police exist to uphold white supremacy." Never mind that the mostly non-white police force in our nation's largest cities might find this risible. Madonna is just as keen. She has called for police officers involved in fatal shootings to be denied due process, saying there should be "no trial."

Rep. Rashida Tlaib went a step further tweeting, "Policing in our country is inherently & intentionally racist." She demanded that we end policing and incarceration. She did not say in whose neighborhood we should release the murderers and rapists, nor did she renounce taxpayer-funded security for herself.

These pleas for injustice are not without effect. In Minneapolis, the police are banned from using chokeholds, tear gas, and tasers, leaving them with no other choice but to use their guns when they are threatened. In New York City, the NYPD's budget has been slashed and the plainclothes anti-crime unit—a major success—has been eliminated. This is happening at a time when the qualified immunity that police officers have earned has been nixed.

Policies matter. There are 1,500 state parolees living in New York City shelters. Every morning when I come to work, there are dozens of crazed men hanging out inside and outside of Penn Station, and nothing is done about it. The cops are told to stand down.

Now an Asian undercover cop was almost thrown onto the subway tracks in Queens. The offender, who has a long rap sheet, went before a judge and was quickly let go.

"My hands are tied because under the new bail rules, I have absolutely no authority or power to set bail on this defendant for this alleged offense," said the judge.

Last June, city leaders in Portland slashed $16 million from the police budget; they also eliminated the gun-violence unit. Guess what happened? Gun violence surged. Conditions are so bad—the result of intentionally disabling the police—that now the mayor is demanding they refund the police.

Chris Cuomo told his declining CNN audience that police reform will not happen until "White people's kids start getting killed." He is not likely to get his wish. As CNSNews Managing Editor Michael Chapman notes, "For black victims of violent crime, a Department of Justice report for 2018 shows that 70.3% of their offenders were black and 10.6% of their offenders were white." Moreover, because whites are involved in relatively few interactions with the police, Cuomo's scenario is not likely to come true.

Attempts to blame the police for the violence committed by Black Lives Matter protesters don't square with the evidence. Last year, researchers at Princeton University studied this issue for a three-month period. They counted approximately 570 Black Lives Matter riots in nearly 220 locations throughout the nation. Last month, it was revealed that Black Lives Matter is responsible for at least 25 deaths and thousands of injuries.

It is not the average African American who wants to destabilize the police. Indeed, in a Gallup survey released last August, 61% of those surveyed want policing to remain the same. Of those surveyed who have had an interaction with the police, 79% of blacks want the cops to spend more or the same amount of time in their neighborhood.

Maxine Waters does not speak for African Americans. In fact, she is not their ally: She is their enemy. It's time she, and others like her, were exposed for what they are—race baiters and cop bashers.