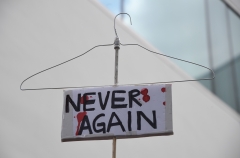 The New York City for Abortion Rights uses a hanger similar to the one above in its logo to promote abortion. (Photo credit: ROBYN BECK/AFP via Getty Images)

On the rare occasion when a pro-life advocate acts irresponsibly, the media are all over it. By contrast, just recently there were two examples of pro-abortion advocates acting irresponsibly, and the media responded with a big yawn.

As we reported on Thursday, Jan. 20, the anti-Catholic outfit Catholics for Choice used a light projection to beam pro-abortion messages on the facade of the Basilica of the National Shrine of the Immaculate Conception in Washington, D.C.; the event was a prayer vigil before the annual March for Life that was held the next day.

We have now learned that on Saturday, the anti-Catholic outfit, New York City for Abortion Rights, projected "God Loves Abortion" and other vile slogans on the exterior of St. Patrick's Cathedral in New York City. Supporters of the group shouted obscenities at pro-life Catholics entering and exiting the Cathedral.

Both of these shell groups are on the losing side of the abortion issue. Over the past few decades, more and more Americans have been moving in a pro-life direction, and the pro-abortion activists know it. They also know that the Supreme Court may overturn Roe v. Wade in June.

This accounts for why the New York City group wants to engage in a confrontation. "The approach of non-confrontation which many feminist organizations have pursued in response to this onslaught [of pro-life victories in state legislatures and the courts] has unfortunately been a failing strategy. Now, more than ever, we need a fighting grassroots movement." They are just itching for a confrontation.

There have been a few legal challenges to light projection protests, but so far no court has ruled in favor of them. They are not seen as trespassing or in violation of nuisance statutes, nor have they resulted in economic harm. Therefore, they are seen as protected speech.

The media have a professional obligation to cover events like the ones in D.C. and New York City. Their reticence has more to do with their politics than their ethical obligations.

In a larger story on the March for Life, the New York Times and the Washington Post made mention of the desecration of the Basilica, but neither covered the assault on St. Patrick's Cathedral. None of the other newspapers covered anything about either event, and all the TV broadcast networks and cable news channels were equally silent.

Last week, we asked our email subscribers to contact Catholics for Choice. This week, we are requesting they contract the New York outfit at nyc4abortionrights@gmail.com.