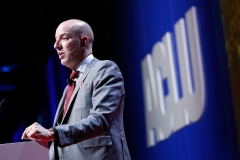 Michael Powell has done some great work at the New York Times, and his lengthy 3,615-word article on the American Civil Liberties Union (ACLU) that was published June 6 is no exception.

I know the ACLU well. As part of my Ph.D. dissertation on the ACLU that I did at NYU, I interviewed the founder of the organization in 1978. I have also authored two books on the ACLU, as well as many articles and pamphlets. There are some aspects of the ACLU that Powell did not address but are worth mentioning.

"ACLU is Torn Over Free Speech Mission and New Voice" is the title of his story in the paper's print edition. In actual fact, from the very beginning, the ACLU was never the kind of principled free speech advocate that many have long believed it was. Moreover, as Powell details, the "new voices"—meaning the unprincipled ones—are ascendant; the role of non-partisan civil libertarians is declining.

When Roger Baldwin founded the ACLU in 1920 (the current leadership falsely claims there were ten founders of the organization—there was only one), he did so to serve the interests of labor, using free speech as a means to that end. This explains why the ACLU did not protest Prohibition (which Baldwin later regretted) and why it sided with the Communist Party. In the 1920s, Baldwin went to the Soviet Union and published a book about his experience, "Liberty Under the Soviets."

In 1934, when millions of Ukrainians were being massacred by Stalin, Baldwin wrote, "I champion civil liberties as the best non-violent means of building the power on which workers' rule must be based....When that power of the working class is once achieved, as it has been only in the Soviet Union, I am for maintaining it by any means whatever."

I titled my first book "The Politics of the ACLU" to challenge the myth that the ACLU has always been a principled civil liberties institution. To be sure, it has won many important victories, and it has long been home to some of the most distinguished civil libertarians in American history (e.g., the late Nat Hentoff and Alan Dershowitz), but there are also too many cases where it has patently violated its purported mission as a non-partisan watchdog.

In the 1930s, the ACLU threatened a libel suit against the American Mercury because it published an article that was critical of the organization. It led to quite a public dustup at the time when both the ACLU and the magazine decided to enlist the famous Baltimore journalist, H.L. Mencken, to review both sides and offer his assessment. He concluded that there was nothing libelous about the article and that the ACLU was not a non-partisan entity. For that he was called a "fascist" by some of the ACLU's leaders.

In the 1940s and 1950s, the ACLU moderated its policies, mostly in response to threats occasioned by World War II. For the first time, it balanced national security issues with individual rights, showing more deference to the former than ever before. It even went so far as to justify the internment of 110,000 Japanese Americans. To this day, the ACLU falsely claims that it opposed the internment. The national organization did not; only the Northern California affiliate did.

The ACLU did not become fully politicized until Anthony Romero took over as executive director in 2001. As the New York Times story demonstrates, the ACLU today has evolved into a highly partisan organization that balks at defending conservative speech while embracing the left-wing agenda. It talks more about white supremacy than it does civil liberties, traditionally understood.

Romero is driven by ideology and money. He is further to the left than any of his predecessors, and his fundraising ambitions make him sound more like an activist for the Southern Poverty Law Center than the ACLU.

Not surprisingly, religious liberty, which was never a priority, is now seen through the lens of the LGBT agenda, making it a threat to their "progressive" cause. The ACLU never lifted a finger to help falsely accused priests and it left unchallenged state restrictions on houses of worship during the pandemic. And, of course, it considers the rights of the unborn to be non-existent.

In other words, while there is some truth to the claim that the ACLU is "torn over its free speech mission," it is not exactly a 50-50 split. There are still some principled officials left, but most of them have departed. Just as the Democratic Party has moved sharply left, the ACLU has as well, even to the point of funding Democratic candidates for public office.

Baldwin, who started as a Communist sympathizer and moved toward the middle, would not recognize what it has become.