Not All Abortion Protesters Are Equal 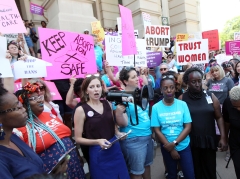 A memo issued by the Department of Homeland Security (DHS) on abortion protesters was recently made public by Axios and NBC News. It warns that in the wake of the leak of the Supreme Court ruling overturning Roe v. Wade, abortion rights extremists "on both sides," as the two outlets describe it, merit scrutiny. News reports falsely argue that pro-life extremists have historically driven most of the violence.

There is no evidence upon which this unwarranted accusation can be made. If anything, not counting the violence that defines the conduct of abortion clinics, it is pro-abortion extremists who have historically driven most of the violence.

Leaving aside who has the better of this argument historically, it is clear that since the leak of the decision overturning Roe, pro-abortion extremists pose the greatest threat to law and order. Click here to see the evidence.

We could find only one case where a pro-life protester engaged in violence since the leak took place. That was when Michael Merritt Graham was arrested at the state Capitol of Arizona on May 3 for punching another person at a rally attended by protesters on both sides.

The DHS is playing politics. Its contrived moral equivalency game tells us a great deal about its mindset. Not all abortion protesters are equal.