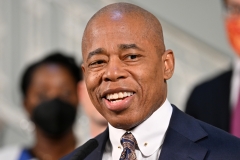 New York City Mayor Eric Adams inherited a mess created by his predecessor, Bill de Blasio. Most New Yorkers had high hopes that he would turn things around. Instead, he is off to a bad start.

New York City has one of the highest unemployment rates of any city in the nation. It is also witnessing a mass exodus of people to other parts of the country — Manhattan leads the nation. This is driven in large part because of the spike in violent crime, made possible because of morally bankrupt D.A.s and an insane bail reform law. The high cost of living is also making it impossible for many to live here anymore. To top things off,  the public schools are a disaster.

And what is Mayor Adams doing? He is spending the taxpayers' money on billboards in Florida to convince non-heterosexuals who live there to come to New York where they can "say and be whoever you want." As if that is a problem in Florida.

Adams is abusing his office and the trust of the people. He was elected to solve the fiscal crisis in New York City and make our city safe again. Instead, he is inventing problems in other states that he purports to solve. His misuse of public funds is a disgrace.

If he actually thought this through, he would know that one of the reasons why New Yorkers are fleeing in record numbers — in all the five boroughs — is precisely because of the kind of irresponsible leadership that de Blasio offered. He was supposed to fix things, not play games.

Ironically, they are leaving in en masse to Florida, a state with low taxes, low crime rates and good schools. And believe it or not, those who live there can actually "say and be whoever they want."