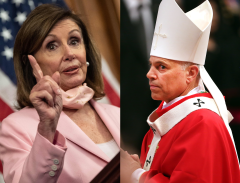 House Speaker Nancy Pelosi, who has been told by her bishop, San Francisco Archbishop Salvatore Cordileone, not to present herself for Holy Communion, has been begging for a confrontation with him for many years. Now she has succeeded.

Less than two years after Cordileone was installed as the new archbishop in 2012, Pelosi, who was House minority leader at the time, "took the lead," according to the San Francisco Chronicle, "in a high-profile lobbying effort to pressure San Francisco Archbishop Salvatore Cordileone not to attend the controversial March for Marriage event...."

The March for Marriage was held to promote the idea of marriage, properly understood: in other words, as the exclusive union between a man and a woman. This bothered Pelosi immensely, which is why she went public with her dissenting position. She has never stopped egging her bishop on since that time.

Americans of any religion, or none at all, would understand if an imam, minister, or rabbi publicly called out a politician who claims to be of his faith for misrepresenting it. They would find it bizarre if the wayward politician called him out. This is exactly how the Pelosi feud with Cordileone began — she started publicly lecturing him, not vice versa.

Cordileone's letter to Pelosi, instructing her not to go to Communion, was not some impulsive act. He has tried to deal with her for many years, trying to bring her back into the fold, but she resists.

At what point does a prominent Catholic lawmaker who promotes the killing of unborn babies — for any reason and at any time of pregnancy — merit sanctions by her Catholic superior? That Pelosi defends her support for abortion-on-demand as the decision of a self-described "devout Catholic" makes her offense all the more hideous.

Worse, by publicly defending what the Church says is "intrinsically evil," she is giving scandal to the Church. To be specific, she is not simply guilty of false advertising: She is giving scandal by leading Catholics to think that they can be pro-abortion and a Catholic in good standing at the same time.

It is rather amusing to read what non-Catholics have to say about this issue. To begin with, it is none of their business. To be sure, it is their business to be for or against the Church's teaching on abortion — that is a public policy matter — but it is not their business to weigh in on the internal strictures of Catholicism, or any other religion.

The reverse is also true. We would not expect Archbishop Cordileone to tell the San Francisco Examiner how to handle their personnel matters. We would also not expect this newspaper to tell him how to deal with Pelosi. But they couldn't resist doing so.

The Examiner has called on Pope Francis not to discipline Pelosi — "who reflects the true spirit of Christian care" — but to remove Cordileone. They want him canned.

As it turns out, nothing Cordileone said violated anything the pope has said about this issue. While the pope has said bishops should not politicize these controversies, he has also said they had a right to address these matters in a pastoral way.

What Pope Francis said on the papal plane on Sept. 15, 2021 is not in dispute. "Then, those who are not in the community, cannot receive communion." "Out of the community: Excommunicated, it's a harsh word, but they don't belong in the community, because they were not baptized, or because they are estranged from it (my italics)." He then added that abortion is "more than a problem: It's a homicide. No middle terms. Whomever does an abortion, kills." It doesn't get much plainer than that.

Ever since Cordileone became the leader of the Catholic Church in San Francisco, the local libertine-minded media have had their sights set on him. That's because he was a leader in the Proposition 8 movement trying to secure marriage as the exclusive union between a man and a woman. So their latest salvos are hardly surprising.

Over the past decade, Archbishop Cordileone has demonstrated great prudence and patience in dealing with Pelosi. He is a man of courage and goodwill, and a loyal son of the Catholic Church.