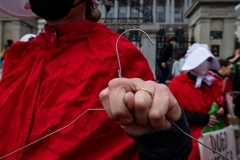 Members of the Boston Red Cloaks gather at the State House to protest the overturning of Roe vs. Wade. (Photo credit: JOSEPH PREZIOSO/AFP via Getty Images)

Radio, TV, the Internet, and newspapers are alive with stories saying that a majority of Americans do not want Roe v. Wade overturned. Those reports are totally misleading. While the actual text of the decision does not allow for all abortions, in practice it does: to perform a late-term abortion, all the doctor has to do is invoke a "mental health" exception and bingo — he can legally abort the baby.

Importantly, the American people have never been in favor of abortion-on-demand, yet this is what Roe allows. Surveys almost never ask respondents if they would support this ruling if they knew that it would allow for abortions at any time during pregnancy, and for any reason whatsoever.

The latest survey on this subject, published by the Pew Research Center, is rich in detail. It is so rich that it easily makes the case that the public wants nothing to do with Roe. Did those who wrote the report come to this conclusion? Not at all. Indeed, they spun their narrative in a way that suggests most Americans are okay with Roe.

The survey, "America's Abortion Quandary," says that "A majority of Americans say abortion should be legal in all or most cases, but many are open to restrictions; many opponents of legal abortion say it should be legal in some circumstances." There are other conclusions that can be drawn from the data, but Pew is reluctant to do so.

"A majority of Americans say they do not agree with Roe v. Wade." That would be an accurate conclusion, drawn from the Pew data, though it is not one that Pew prefers to make.

Only 19% of Americans say abortion should be legal in all cases. That means 81% are opposed to what Roe allows. That is the real story. But it is not the one the researchers chose to flag. There are other provisions in Roe that the public opposes.

The report found that a majority of abortion supporters — not just those who oppose abortion — say that "how long a woman has been pregnant should matter in determining legality of abortion." Indeed, this seriously undercuts the narrative that most Americans do not want Roe overturned.

Roe allows women to abort their baby in the first 24 weeks. But that is not what the American people want. Pew found that 43% want it to be illegal at 24 weeks, approximately double the number of those who think it should be legal (22%).

Moreover, a majority of abortion supporters — nearly seven-in-ten — say that those who perform abortions should be required to notify the parent or legal guardian if the woman seeking the abortion is under 18. That's a limitation that Roe does not honor. In other words, this is another reason why the public is not happy with this decision.

Most telling is a sentence that the Pew authors wrote that seriously compromises its pro-abortion tilt. They concluded that "nearly two-thirds of the public thinks abortion either should be entirely illegal at every stage of a pregnancy or should become illegal, at least in some cases, at some point during the course of a pregnancy (their emphasis)." That makes the definitive case against the ruling in Roe.

It should be noted that the Pew researchers only mention the Roe decision by name twice; they were descriptive remarks at the beginning of the report. But they had plenty of opportunities to say to respondents, "This is what Roe allows," and then ask specific questions about it.

Pew deserves high marks for its methodology. Its interpretation of its own data, however, reveals a bias — it put the happiest face possible on a survey that more accurately supports the views of pro-life Americans.