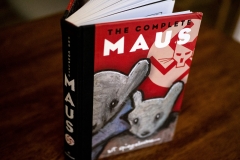 Featured is the cover of the graphic novel "Maus," written and illustrated by Art Spiegelman. (Photo credit: MARO SIRANOSIAN/AFP via Getty Images)

Over 200 leaders of Polish American organizations have signed a letter to members of Congress asking that a book which offers a vile depiction of Poles during the Holocaust be discontinued in the schools.

The letter has been distributed to members of the House Committee on Education and Labor, Subcommittee on Early Childhood, Elementary, and Secondary Education. It follows a decision by a Tennessee school district to drop the book from its curriculum.

The best-selling graphic novel, "Maus," by Art Spiegelman, which is targeted at children, features illustrations that are outrageous and needlessly offensive. But it is the lies, and the vicious insults hurled at Poles, that merit the most serious condemnation.

Removing books from a school's curriculum should never be taken lightly, but when the book in question (a) maligns an entire ethnic group (b) is historically indefensible and (c) is aimed at innocent, unsuspecting children, then to make it available in the schools is nothing short of educational malpractice.

Those who defend assigning "Maus" would not assign a book which characterized blacks as pit bulls or American Indians as piranhas, never mind distort their historical heritage by depicting them as savages.

Many thanks to Ronald Rychlak, Distinguished Professor of Law at the University of Mississippi, for bringing this issue to my attention. He is a member of the Catholic League's board of advisors. I would also like to note that one of the signatories, Richard Walawender, serves on our board of directors.