The Politics of the World Cup 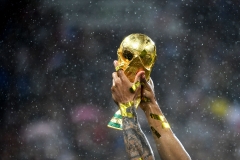 Sports was one of the last bastions of political neutrality, which explains its longstanding appeal, if not charm. People of every political persuasion would put their politics aside and join hands in communion, rooting for the home team. No more. Division and polarization rule.

The World Cup is the latest example of how far removed we are from a time of political tranquility. Played in Qatar, the ruling class in the West has shown just how ideologically and ethically corrupt it is.

The entire Western world is caught in the grip of a homosexual whirlwind that is unparalleled. The soccer players from England, the Netherlands, Belgium, Denmark, Germany, Switzerland and Wales intentionally planned to violate the strictures of FIFA, the game’s governing body, by wearing “OneLove” armbands during the game. Threatened with sanctions, they backed down.

The players from England took a knee on the field before squaring off against the United States. They were making the case for “inclusivity,” a term so overused it carries no substantive weight anymore. It’s a cliché, a cheap slogan designed to make its users feel morally superior.

None of these players has ever been known to take a knee in protest of abortion. Might that have something to do with serving their own interests? Single men, after all, have long been the biggest champions of abortion. Small wonder why.

The elites who represent the United States showed their contempt for diversity when they disrespected the Iranian flag: on social media, the American team  showed the flag with green, white, and red stripes, leaving out the Islamic Republic religious emblem. The players, however, had nothing to do with this stunt.

Gregg Berhalter is the USA head coach, and he made plain his politics when he showed up at the first game wearing a shirt that did not feature the American colors of red, white and blue. Nor did his shirt say “United States.” Instead, he wore a black-and-white Nike shirt that simply said, “STATES.” It’s not as though he chose to be discrete. Two years ago he was proudly wearing, and loudly praising, a Marxist-led violent group that is under investigation for tax fraud, and for enriching themselves at the expense of their donors. It’s called Black Lives Matter.

The captain of the U.S. team is Tyler Adams, a black athlete. When asked about defending his home country, given its racist problems, he said progress has been made, but not before he opined, “There’s discrimination wherever you go....” Someone should have asked him to provide some personal examples. The 23-year-old is already worth $4 million and he just signed a deal worth $24 million.

FIFA president Gianni Infantio is another self-proclaimed victim, notwithstanding his privileged status. After he fell under pressure to condemn Qatar’s human rights record, he decided to lash out at his fellow left-wing Europeans for making him look bad. “I think what we Europeans have been doing the last 3,000 years we should be apologizing for next 3,000 years before starting to give moral lessons to people.”

Any man who walks around with that much guilt is to be pitied.

A super-rich lawyer who speaks seven languages, Infantio has also been accused, on several occasions, of ripping off FIFA for personal expenses, even to the tune of charging mattresses at his home to the governing soccer body. A staunch environmentalist, he likes to travel by personal jet so he can “persuade” officials to offer the World Cup to Qatar. Oh yes, he owns homes in Switzerland and Qatar.

How exactly did Qatar, a little desert nation, wind up with the World Cup? It beat out the U.S., South Korea, Japan and Australia.

In 2020, after years of investigation and indictments, the U.S. Department of Justice said that representatives working for Qatar had bribed FIFA officials to secure the right to host the 2022 World Cup (it made the same claim against Russia for its hosting of the 2018 World Cup.). Three South American officials were indicted for receiving payments to vote for Qatar.

This raises the question: What are all of these self-righteous, guilt-ridden, officials, coaches and players doing in Qatar? Why didn’t they boycott the games? Is it because they don’t want to jeopardize their lucrative contracts? If so, what would that make them?

Nike is one of the world’s greatest exploiters of human beings in the world. Its slave master status in China is well known, yet all of these soccer officials, coaches and players prominently wear Nike apparel.

One year ago, Nike signed a 10-year deal with U.S. Soccer, making it the largest and longest commercial partnership in the American governing body’s history.

In short, Nike, FIFA, and many of the coaches and players, like to showcase their commitment to human rights while enriching themselves  off the backs of the oppressed. There are plenty of American gangsters who have a more honorable record than these people.