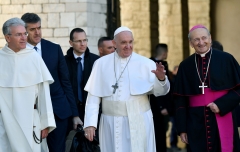 Pope Francis (C) waves as he leaves along with Archbishop of Bari-Bitonto, Francesco Cacucci (R) the Basilica pontificia di San Nicola after a meeting with bishops during a visit to Bari, southern Italy. (Photo credit: ALBERTO PIZZOLI/AFP via Getty Images)

In 1973, the year that abortion was legalized, an anti-Catholic group was founded to promote abortion rights.

But it was not the usual anti-Catholic outfit. This one falsely assumed a Catholic identity. Initially called Catholics for a Free Choice, it would later shorten its name to Catholics for Choice. Having been around for almost a half-century, it now looks like it is in disarray.

When it was founded in New York City, it did not set up shop in the New York Archdiocese (as did the Catholic League when it moved to the Big Apple in 1992). No, this "Catholic" pro-abortion outfit rented space from Planned Parenthood. Its first president was Father Joseph O'Rourke; he was expelled from the Jesuits in 1974. It now appears that its time is up: It has been curiously without a president this entire year.

Jon O'Brien was president of Catholics for Choice for 12 years, having succeeded Frances Kissling, the long-time champion of abortion-on-demand. On December 2, 2019, this well-funded letterhead (it has no members) announced that he resigned. In his place was named an acting president, Sara Hutchinson Ratcliffe. She is still acting president.

Ratcliffe honed her abortion-rights skills at Planned Parenthood. Under her tutelage, almost nothing has been done. Its quarterly magazine, "Conscience," stopped publishing in the fall of 2019. In 2020, Catholics for Choice issued a mere eight press releases and it is seldom cited in the news. By contrast, the Catholic League generates news releases on a steady basis and is cited in the news almost daily.

Every presidential-election year, Catholics for Choice tries to convince the public that it is entirely acceptable for Catholics to be pro-abortion. It is not. From the Vatican to the United States Conference of Catholic Bishops, directives have repeatedly been issued making it clear there are not two legitimate Catholic positions on abortion. There is only one: pro-life. This year, the invisibility of this faux Catholic outlet will not be of any use to Joe Biden.

Without funding from the Ford Foundation and other left-wing philanthropies, Catholics for Choice would fold. It's time it should. Even its allies must know that its time is up—it is accomplishing nothing.