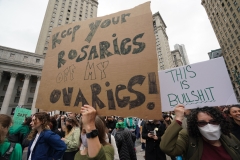 People protest in reaction to the leak of the Supreme Court draft abortion ruling on May 3, 2022 in New York City. (Photo credit: BRYAN R. SMITH/AFP via Getty Images)

The cops will hopefully be out in force Sunday to monitor planned attacks inside Catholic churches. A left-wing fascist group, Ruth Sent Us, is asking its followers to crash Catholic churches on Mother’s Day.

Vandals have already struck in Boulder, Colo., desecrating a church, and pro-abortion lunatics have rioted in Los Angeles.

Police clashed with a small crowd in downtown Los Angeles on Tuesday, May 3, following an abortion rights protest in the city sparked by a leaked draft opinion revealing the Supreme Court’s plans to overturn the Roe v Wade decision. pic.twitter.com/1g87Io7Thh

Ruth Sent Us is named after Supreme Court Justice Ruth Bader Ginsburg. While Ginsburg was an abortion-rights advocate, she also made it clear that the decision to legalize abortion should not have been made by the Supreme Court — it was up to lawmakers to render such a ruling. Moreover, she was never one to promote violence, never mind counsel a Nazi-like attack disrupting Mass.

Thus, Ruth Sent Us is wildly out of step with the thinking of the person they claim to be honoring. In fact, they are dishonoring her legacy.

We will press the authorities to prosecute any attack on a Catholic Church as a hate crime. These thugs need to be stopped in their tracks.

If President Biden does not address this issue, he is aiding and abetting anti-Catholicism.