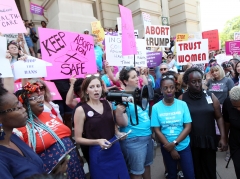 Abortion rights advocates including NARAL Georgia Director Laura Simmons (3rd-L) rally in front of the Georgia State Capitol in Atlanta to protest new restrictions on abortions that have been passed in Georgia, May 21, 2019. (Photo credit: TAMI CHAPPELL/AFP via Getty Images)

Pro-life Democrats tried to persuade Joe Biden and the leadership of the Democratic Party to soften their language on abortion rights. But the 2020 Democratic Party platform that passed on Aug. 19 shows they lost. Indeed, they lost on every recommendation they made.

On May 12, Kristen Day, executive director of Democrats for Life of America (DFLA), wrote a letter to the members of the Platform Committee. She made four recommendations, three of which were specific.

The DFLA lost on all three. The platform announces Democrats will "repeal the Hyde Amendment," as well as the codification of "the right to reproductive freedom." Furthermore, the platform says nothing about making abortions "rare." Conscience rights are also mentioned nowhere.

The DFLA must have known that Biden would never commit to making abortions "rare." This explains why its second letter to the Platform Committee, issued three months later on Aug. 14, only included reference to the first and third recommendations listed above. It was signed by more than 100 Democratic politicians.

There was a time, not too long ago, when Biden would have had no problem accepting all three recommendations. Indeed, he was never an extremist on abortion, until recently. Now he is: there is no abortion, at any time of pregnancy, or for any reason, that he finds objectionable.

This shows how extreme Biden has become. He does not want abortion to be rare, because if he did, he would have adopted the language of the DFLA. That commits him to the most promiscuous exercise of abortion imaginable. What has happened to this professed Catholic?

It's too late to change now. Biden has aligned with NARAL, the most rabid defender of abortion in the nation. In fact, the group recently endorsed him.

Joe Biden and his Democratic Party platform just shut the door tight on pro-life Democrats. Looks like the big tent has a hole in it after all.