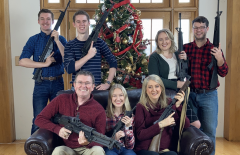 Rep. Thomas Massie’s (R-KY) Christmas card shows a picture of him and six other members of his family each holding a long gun. The card carries the inscription, “Merry Christmas! ps. Santa, please bring ammo.” A photo of the card was posted on Twitter on Saturday, Dec. 4.

Massie has been criticized for doing so, drawing the ire of those who say that this card comes on the heels of the Michigan school shooting. On Monday, he stood his ground, saying he would not delete the photo.

Rep. Massie’s Christmas card is offensive, but not because we believe he intentionally tried to make a statement relative to what happened in Michigan.

The gun imagery is in bad taste. If this needs to be explained, then he has an even bigger problem. Most important, it has absolutely nothing to do with honoring the meaning of Christmas.

For many years, we have objected to the dumbing-down of Christmas, using it is a medium to make statements that are extrinsic to the meaning of Christmas. Whether it is nativity scenes with animals in lieu of the Holy Family, or Christmas cards that are nothing more than a family album, the trend has been to relegate the birth of Jesus to a second-class status. That is why Massie’s contribution is not welcome.

In 2005, I received a Christmas card from President George W. Bush and the First Lady. When asked by the Washington Post if I objected to its secular tone — “Merry Christmas” was noticeably absent — I said that while I did not like it, I assumed all presidents issued some generic Christmas cards. I was wrong.

Reporter Alan Cooperman told me that every president from FDR to Bush’s father had issued at least one card while in office that said “Merry Christmas.” That changed things. The newspaper quoted me saying,  “This clearly demonstrates that the Bush Administration has suffered a loss of will and that they have capitulated to the worst elements in our culture.”

Rep. Massie has plenty of opportunities throughout the year to sport his guns. Christmas should not be one of them.