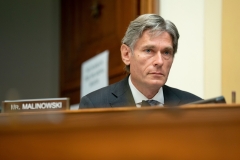 Catholic League president Bill Donohue wrote to a New Jersey Democratic congressman about some recent remarks the congressman made about the parents of schoolchildren.

You recently addressed the issue of parental involvement in education (I have seen the video), and it is disturbing, to say the least. Parents across the nation are rightfully concerned about attempts to induce children to question their sexual identity, often behind their backs.

The evidence is indisputable. Yet you took the opportunity at a recent town hall meeting to berate these parents, portraying them as part of a "fringe movement." You are sadly mistaken — they are genuinely concerned about the wellbeing of their children. Contrary to what you say, they are not part of some highly politicized movement: They are part of a grassroots effort to demand accountability in the public schools.

Your decision to depict these parents as "banning books" is scurrilous. Instructing young children on sexual practices, and showing them graphic depictions of men having sex with men, is not education: it is indoctrination of a very sick kind. You cannot claim ignorance — there are more than a few of these books being used in public schools.

You also belittled parents who have serious problems with boys competing with girls in girls' sports. How can it be that a man like you, who has demanded rights for women in Afghanistan, is so complacent about the denial of women's rights at home? You must also know that these boys who compete in girls' sports are allowed to use the same locker and shower facilities. Have these girls no privacy rights?

Your district is approximately one-third Catholic. Perhaps you can ask a local pastor if you can talk to your Catholic constituents, telling parents who object to sexual engineering in the schools what you really think of them.

Please rethink your position. At the very least, save us your scorn.