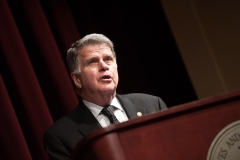 US Archivist David Ferriero speaks during a discussion on "The Fourteenth Day: JFK and the Aftermath of the Cuban Missile Crisis/The Secret White House Tapes" at McGowan Theater. (Photo credit: Kris Connor/Getty Images)

When I was a professor, I told my colleagues how phony they were in supporting affirmative action. None of them were in favor of it when they had a friend or lover who was interested in a faculty opening — it was only when they didn't have someone to plug that they played the game. They didn't disagree.

Nothing has changed since, only today we have the specter of high-ranking white men insisting that more women and minorities be hired. It becomes even more hypocritical when this pitch is made on the eve of their retirement.

The latest phony is David Ferriero, archivist of the United States. On March 14, he urged the Biden Administration not to hire a white guy to replace him. "That's advice I've given to the White House already: that you better not hire another white male...we've had ten white males.''

Ferriero will retire in mid-April. If he had any integrity he would never have taken the job in 2009. He knew then that all the previous U.S. National Archivists were white guys, so he should have dropped out in favor of someone who did not share his anatomy or race.

He had another chance to quit on Jan. 13, 2022, the day he announced his retirement. But he didn't. To make amends, he should now declare that he will not take a dime from his pension fund, and should instead redistribute his earnings to those women and minorities whom he deliberately passed over for employment. There are quite a few of them.

Dannielle Blumenthal worked at the National Archives for several years while Ferriero was the head honcho. She claims the workplace is "a very structurally racist place (her emphasis)." She ridicules him for his latest virtue-signaling scheme, namely his decision to launch The Archivists' Task Force on Racism. The "Report to the Archivist," released April 20, 2021, is chock-a-block full of all the right code words, "diversity" and "inclusion." Truth to tell, it amounts to nothing but a hill of beans.

As to be expected, the report begins by paying homage to George Floyd, the ex-con drug addict who died following an altercation with a Minneapolis cop after resisting arrest. Then it gets serious, noting a "preponderance" of blacks and other minorities in "lower-paying, lower-status jobs." It also notes "the preponderance of white people in higher-paying, higher-status jobs."

This kind of systemic racism happened on Ferriero's watch, and indeed he must bear at least some of the blame for it. Why didn't he do anything about it? According to Blumenthal, under Ferriero, "racism was baked in to the leadership structure. Everyone (or most people) in power were Caucasian."

Ferriero is hardly a freak. We recently published an analysis of ten major corporations, ranging from Goldman Sachs to Walmart, assessing their commitment to diversity and comparing it to their actual track record of hiring minorities. All ten have a lousy history of making good on their much-vaunted interest in hiring blacks, Hispanics, and Asians. The ruling class is a white boys' paradise.

When I taught sociology at La Roche College in Pittsburgh (now a university), a left-wing professor of English, who was recently hired, cornered me in the parking lot on a Friday afternoon. He said one of his students was making the case against affirmative action, prompting him to ask if she had been taking my classes. Sure enough she was.

He smiled, self-assuredly, and walked away. I stopped him.

"You have a moral obligation to resign immediately," I said.

But why, he asked.

"Because you took a job from a black person," I responded.

His retort was priceless.

"I thought I got the job because I was the best person who applied."

To which I said, "That's my position — not yours."

The problem with liberals is that they are quick to offer an ethical checklist for others, but always find a way not to apply it to themselves. For example, they love to write about climate change while preparing a speech aboard their private jet. They love to give talks about gun control while their armed bodyguards stand nearby. They love to condemn the construction of a wall on our southern border while living securely in their gated community.

The David Ferrieros of this world pat themselves on the back for establishing blue-ribbon committees on racial equality, and then doing nothing about it. They hope no one notices. We do. Now you do as well.