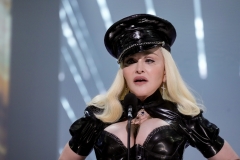 For most Americans, abortion is a difficult subject. The vast majority did not support what the Roe and Casey decisions allowed, which was abortion through nine months with no restrictions. Now that those rulings have been overturned by the Supreme Court, the states will decide what the terms should be. This should be pretty straightforward, but to celebrities — who are obsessed with sex — this is a serious crisis.

It would be an understatement to say that celebrities have become unhinged: they have been sent into orbit. Many showed how articulate they are by spouting vulgarities while others threatened to get even with Supreme Court justices.

Among those who dropped the f-word in denouncing the decision were Kesha, Busy Philipps, Billie Joe Armstrong (he pledged to renounce his citizenship), Pink, Olivia Rodrigo, Janelle Monáe, Sophia Bush, Glennon Doyle and Monica Lewinsky. Others sported their brilliance in a different manner.

Cher accused the justices who voted to overturn Roe of being "RESPONSIBLE FOR THE DEATHS OF HUNDREDS OF THOUSANDS OF AMERICAN WOMEN" (all-caps in original). Ana Navarro-Cárdenas opined, "Maybe [Clarence] Thomas prefers Americans have sex with their pistols and marry their AK-47's."

Taylor Swift said she's "absolutely terrified that this is where we are." Bette Midler shouted that "it's none of your godd*mned business what I do with my body."

Alyssa Milano predicted that "overturning #RoeVsWade will have deadly consequences." Barbra Streisand said, "The Court uses religious dogma to overturn the constitutional right to abortion. This Court is the American Taliban." Valerie Bertinelli complained that "The minority of white Christian nationalists run our country and are not Christian in any sense of the word." Kim Kardashian commented that "In America, guns have more rights than women."

Whoopi Goldberg, who has admitted to having six or seven abortions — she's not sure how many — had this to say about Justice Clarence Thomas: "You better hope that they don't come for you, Clarence." She did not identify who the "they" are. Jane's Revenge? Antifa? Black Lives Matter?

Others took this somber occasion to brag about their abortions. Phoebe Bridges told us what her abortion meant to her. "I don't think about it as a baby, of course not." Of course not.

Madonna said on Friday she woke up to "terrifying news." She said, "I am scared For my daughters. I'm scared for all women in America, I am just plain scared." Very scary.

She added that she was planning to attend Pride events in New York City. She did. She appeared at a surprise concert with Dominican rapper Tokischa. Pictures of them emerged showing Madonna humping the rapper and Tokischa dropping to her knees simulating oral sex on the 63-year-old.

There are many reasons why American society is morally debased, but right at the top is the contribution made by the entertainment industry. There is more modesty in a nudist colony than at any of their performances.