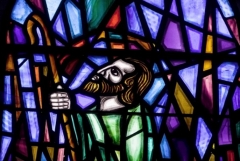 The heroics of St. Patrick are not appreciated as much as they should be.

There is much to celebrate on March 17. Fortunately, St. Patrick's writings, though slim, are eye-opening accounts of his life: Letter to the Soldiers of Coroticus and Confession reveal much about the man. Along with other sources, they paint a picture of his saintliness.

Patrick was born in Britain in the 4th century to wealthy parents. It is likely that he was baptized, though growing up he did not share his family's faith. He was an atheist.

When he was 15, he committed what he said was a grave sin, never saying exactly what it was; it appears it was a sexual encounter with a young girl. No matter, it would haunt him throughout his life.

At age 15 or 16 (the accounts vary), Patrick was kidnapped and enslaved by Irish barbarians. They had come to plunder his family's estate, and took him away in chains to Ireland. While a slave, he converted to Christianity, praying incessantly at all hours of the day. After six years, he escaped, and made his way back home.

His family thought he was dead, and with good reason: no one taken by Irish raiders had managed to escape and return. St. Patrick biographer Philip Freeman describes how his family received him, stating "it was as if a ghost had returned from the land of the dead."

After he returned home, he had a vision while sleeping. He felt called to return to Ireland. This seemed bizarre: this is where he was brutalized as a slave. But he knew what Jesus had commanded us to do, "Love thy enemy." He was convinced that God was calling him to become a missionary to Ireland. So he acted on it, despite the reservations of family and friends.

Patrick became a priest, practiced celibacy, and was eventually named a bishop. Contrary to what many believe, he did not introduce Christianity to Ireland, nor was he Ireland's first bishop. But he did more to bring the Gospel to Ireland than anyone, converting legions of pagans, especially in the northern parts of the island.

His missionary work in Ireland has been duly noted, but his strong defense of human rights has not been given its due.

No public person before him had denounced slavery, widespread though it was. Jesus was agnostic on the subject, Aristotle thought it was a natural way of life, and neither master nor slave saw anything fundamentally wrong with it. Patrick did.

Though he did not invoke natural law specifically, he was instinctively drawn to it. He taught that all men were created equal in the eyes of God, and that the inherent dignity of everyone must be respected.

Patrick did more than preach—he lashed out at the British dictator, Coroticus, harshly rebuking him for his mistreatment of the Irish. In fact, Patrick found his Irish converts to be more civilized than Coroticus and his band of thugs.

Patrick was way ahead of his time in the pursuit of human rights. Not only were men of every social status entitled to equal rights, so were women. In his Letter to the Soldiers of Coroticus, he scolds "the tyrant Coroticus—a man with no respect for God or his priests." More important, he made a startling plea: "They must also free Christian women and captives." His reasoning showed the power of his faith when he said, "Remember, Christ died and was crucified for these people."

He did not mince words. "So, Coroticus, you and your wicked servants, where do you think you will end up? You have treated baptized Christian women like prizes to be handed out, all for the sake of the here and now—this brief, fleeting world."

What makes this all the more dramatic is the way the pagan world thought about women: the idea that women were equal to men was totally foreign to them. But the women understood what Patrick was saying, and gravitated to him in large numbers. The Christian tenet that all humans possess equal dignity had taken root.

Did the Irish save civilization, as Thomas Cahill maintains? Freeman thinks not—"it had never been lost." But everyone agrees that had it not been for St. Patrick, and the monasteries that followed, much of what we know about the ancient world would not exist.

Indeed, it is difficult to fathom how classical Greek and Roman literature would have survived had it not been for the Irish monks who attracted students from many parts of Europe. They are responsible for preserving the great works of antiquity. And all of them are indebted to St. Patrick.

It is believed that he died on March 17, sometime during the second half of the fifth century. That is his feast day, the source of many celebrations in his honor. His impact extends beyond the Irish and the Catholic Church—human rights are a global issue—making him a very special person in world history.

Bill Donohue is President and CEO of the Catholic League for Religious and Civil Rights, the nation's largest Catholic civil rights organization.