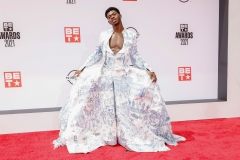 While most people probably missed the Black Entertainment Television (BET) Awards on June 27 (they only average about 3 million viewers), that did not stop the rapper Lil Nas X from displaying his hatred for the Catholic Church.

On the red carpet, Nas, a gay black man, wore a flamboyant dress from Andrea Grossi's debuted fashion line, "Welcome to DeusLand." Grossi claims the inspiration for this apparel is to highlight the wrongs of the 21st century.

In the dress worn by Nas, Grossi attempts to draw parallels between the Nazis and the Catholic Church, claiming that both "ideologies...have led the populations for a long time in wrong ways."

Naturally, Nas jumped at the opportunity to display his vitriol for the Church by donning the dress for his red carpet appearance.

Nas claims his experience as a gay black man has caused him to suffer terrible oppression at the hands of the Church. Of course he has yet to provide any evidence of this, but this has become the inspiration for his "music," which engages in activism designed to mock and belittle the Church.

In his music video titled "Montero (Call Me By Your Name)," Nas graphically displays his animosity for Catholicism. In the video, Nas spites the Church for its teachings on sexuality by venturing to hell and engaging in sexual acts with Satan. Nas then proceeds to kill the devil, crowning himself as the new king of hell.

However, this did not go far enough for Nas. He intended to coincide the release of this music video with his launch of a limited edition of satanic-themed shoes, which according to some reports contained a drop of human blood. In keeping with the theme, he intended to sell only 666 of pairs. This venture came to a screeching halt when Nike threatened to sue Nas for using Nike shoes unauthorized by the company.

From dresses to music videos to shoes, Nas has taken many opportunities to bash Catholicism. He is a troubled man in need of serious counseling.