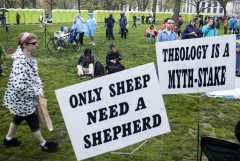 Their heads are exploding. The secular maniacs who staff the most prominent atheist organizations are beside themselves over the Supreme Court ruling on school choice. In a 6-3 decision, the high court ruled that if there is public funding for private schools in Maine, to deny taxpayer money for religious schools is discriminatory.

American Atheists said this decision will inspire the "dangerous Christian nationalist wing [to] grow only louder." Americans United for Separation of Church and State accused the justices of favoritism, saying it is "only when conservative Christians" make claims of discrimination that they act. Similarly, Freedom From Religion Foundation said this decision had the effect of "solidifying Christian favoritism."

The most extreme charge was made by the American Humanist Association. It said the ruling was "another clear win for the far right-wing reactionary movement utilizing 'school choice' as a Trojan horse for school re-segregation."

Of course, the Maine case had nothing to do with advancing Christianity.

If compulsory education is the law of the land, the same government that compels parents to send their child to school cannot decide to fund private schools in rural areas, where there are no public schools, but not religious ones. It is a matter of equity, pure and simple. Furthermore, the ruling applies equally to those who want to send their children to a non-Christian sectarian school.

What are the secular zealots afraid of? The Secular Coalition for America complains that the Maine ruling will motivate "parents who want to set the specifics of the curriculum to meet their worldview" (and not the worldview of secular activists). The ACLU frets over taxpayers funding "religious instruction and indoctrination." The Center for Inquiry goes further, saying the taxpayers are on the hook "to pay for children to be indoctrinated with religious viewpoints they reject and may even find abhorrent."

All of these secular organizations either have no problem with, or actively promote, indoctrinating students, beginning in Pre-K, with the most invidious ideas about sex. Little kids are being asked if they are okay being a boy or a girl. If in doubt, they are then groomed to consider switching their sex. This is more than indoctrination — it is child abuse.

We live in sick times when sick members of the ruling class are on a tear, ripping up established moral norms, imposing in their place a radical secular worldview where there is no such thing as nature or nature's God. They need to be defeated in all walks of life, not just in education.