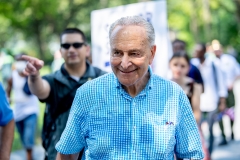 On Wednesday, Sen. Chuck Schumer (D-NY) will introduce the Women's Health Protection Act, the most radical pro-abortion bill ever written. It would effectively guarantee abortion-on-demand. It would also gut First Amendment protections for religious liberty by exempting the Religious Freedom Restoration Act (RFRA).

Schumer epitomizes the Democratic Party on abortion and religious liberty. Not too long ago, the Democratic Party was cautiously pro-abortion. Two days after becoming president in 1993, Bill Clinton said, "Our vision should be of an America where abortion is safe and legal but rare." When Hillary Clinton ran for president in 2008, she repeated this line, adding, "By rare, I mean rare."

On March 11, 1993, less than two months after President Clinton carved out a relatively moderate stance on abortion, Rep. Chuck Schumer introduced RFRA in the House; Sen. Ted Kennedy broached it in the Senate. The final vote: it passed unanimously in the House and the vote in the Senate was 97-3.

Today, Schumer is leading the fight to eradicate the bill he once championed. Ironically, he is now on the side of the three who voted against RFRA in 1993. That puts him in bad company.

Two of them — Sens. Jesse Helms and Robert Byrd — were white racists. Helms said the 1964 Civil Rights Act was "the single most dangerous piece of legislation ever introduced in the Congress," and Byrd was a former member of the Ku Klux Klan. While Schumer is not a racist, his backward thinking on religious liberty is identical to that of Helms and Byrd.

Commenting on RFRA, President Clinton, who signed the bill, said that the "fundamental right of all people" to "follow our own personal beliefs" and "practice our faith freely and openly" is "essential to our well-being." What Schumer said was even more dramatic.

Schumer spoke from the floor of the House on May 11, 1993, saying that "We all know that the First Amendment guarantees the right of the free exercise of religion. Traditionally the Supreme Court interpreted that guarantee to mean religious freedom can be infringed only when the government has a compelling interest in doing so."

He went on to say that a 1990 decision, Employment Division v. Smith, changed that tradition, promulgating a new standard where "government only has to show a legitimate interest in order to burden religion." It was this relatively weak protection that RFRA rectified.

The evolution of Schumer, and the Democratic Party that he epitomizes, has radically turned against life and liberty. It is no longer even a figment of its former self.