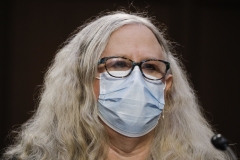 It is all the rage among elites in many quarters to sanction sex transitioning for minors. It is time to call this madness for what it is—child abuse. The damage that is being done is incalculable. Consider what this process involves.

Puberty blockers are used to facilitate the sex transition process. These medications stop the normal estrogen or testosterone progression in girls and boys during puberty, affecting vocal chord changes, the development of breast tissue, brain development, and the like. So little is known about the long-term effects of puberty blockers that one doctor said we are dealing with a "blank slate."

Children who want to continue physically transitioning by taking hormones create a real challenge for doctors, never mind the child. The physical changes are irreversible. Minors who transition are at risk later in life for heart disease, diabetes, and blood clots. Taking the hormones of the opposite sex can also reduce fertility. Are adolescents really capable of making these permanent, life-altering decisions?

The mental problems associated with sex reassignment are multiple, and they are so serious as to make one wonder what kind of health professional would countenance it. Adults who undergo the transitioning are at risk not only for depression, but suicide. It will not do to say that these maladies are a function of the lack of support these people receive. If that were the case, why do transgender people suffer from high rates of suicide in places like Sweden where they are totally accepted?

If adults are at risk mentally following sex reassignment, we can only guess what minors are likely to be faced with down the line. Do those who profit from their "services" even care?

Dr. Rachel Levine is a man who now identifies as a woman. He was chosen by President Biden to be his new assistant health secretary. Given his status, both physical and professional, it is important to know what his position on sex transitioning is.

When Roger Severino was director of the Office of Civil Rights at the Department of Health and Human Services (HHS) in the Trump administration, he asked Levine a question that even an elementary student could answer. "What does it mean to be male or female?" The good doctor couldn't answer.

At the Senate hearing for Levine, Sen. Rand Paul asked him a pointed question. "Dr. Levine, do you believe that minors are capable of making such a life-changing decision as changing one's sex?" Levine dodged the question saying, "transgender medicine is a very complex and nuanced field."

Paul followed up with another question. "Do you support the government intervening to override the parent's consent to give a child puberty blockers, cross-sex hormones and/or amputation surgery of breasts and genitalia?" Levine dodged the question again, saying, "Senator, transgender medicine is a very complex and nuanced field."

Levine is not alone in refusing to answer such basic questions. At the Senate Finance Committee hearing on Xavier Becerra, Biden's nominee to head HHS (he has since been confirmed), Sen. James Lankford said, "the vast majority of Americans do not believe that a nine-year-old child can consent to puberty blockers or that a thirteen-year-old girl can consent to a double mastectomy." He then asked Becerra what his position was on such matters. The best Becerra could promise is that he would follow the law.

Is President Biden aware that these men think it is okay for minors to switch their sex? Absolutely. He himself says that little kids should be afforded the chance.

Last October, during a town hall conversation, Biden was asked by a mother of a transgender child what he would do to help people like her and her child. Biden's response:

The idea that an 8-year-old child, a 10-year-old child decides, you know, "I want to be transgender, that's what I think I'd like to be, it'd make my life a lot easier"—there should be no discrimination.

Most children who seek to transition, if given time, will change their minds. What they are experiencing is not normal.

According to Dr. Paul McHugh and Dr. Lawrence S. Mayer, two prominent psychiatrists who are experts in this field, the idea that "a person might be 'a man trapped in a woman's body' or 'a woman trapped in a man's body'—is not supported by scientific evidence." We need to help young people who suffer from this disorder to get better, not get deeper into trouble.

Once the boys and girls are subjected to the treatments, it is too late. Unfortunately, Biden is stacking his administration with those who are ratifying his twisted vision of the sexes.

It's time we put an end to this child abuse.