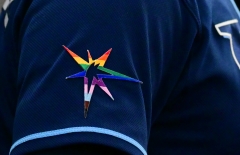 Were it not for the explosion of revenue coming from all the big TV screens, due to the multiplicity of cable sports channels, most owners of professional sports would be hurting. Fan attendance has been declining steadily, and even in terms of viewership, the NBA finals is drawing abysmal ratings. There are many reasons for this revolt, one of the most important of which is the increasing politicization of the game.

Recently, five Tampa Bay Rays players refused to wear the gay pride rainbow logo on their uniforms, citing religious objections to the gay lifestyle. They were immediately branded as "bigoted" by ESPN-commentator Sarah Spain and many others.

Cyd Zeigler, writing for outsports.com, also objected, saying, "Being gay is not a 'lifestyle.'" Technically this is true, but what the players were objecting to was precisely the "lifestyle," not the status of a person who happens to be gay. Besides, does he really believe that Pride Month is nothing more than a recognition of the mere existence of homosexuals?

David Hill at calltotheopen.com said that "Calling homosexuality a choice is a horrendous perspective." Similarly, Sam Fels, writing for deadspin.com, said that to "talk about homosexuality as a 'lifestyle,' or 'choice,''' means "you don't get it."

Both Hill and Fels are correct to acknowledge that Pride Month is really about homosexuality, not about being gay. Homosexuality is conduct, a behavior that Christians and others believe to be sinful, if not repulsive. They are entitled to their belief. Moreover, they have a First Amendment right to exercise their freedom speech and their freedom of religion.

Tyler Kepner, writing in the New York Times, opines that "Words like 'lifestyle' and 'behavior' are widely known tropes often interpreted as a polite cover to condemning gay culture." He is to be commended for acknowledging the fact that a gay culture exists — that is what the baseball players were objecting to — but he is remiss in not telling us more about it. Larry Kramer, the gay guru, once called the gay lifestyle a "death style." That alone is worthy of discussion.

Kepner says that "the players should have been expected to reflect" the position of the team by wearing the special uniforms. AJ Gonzalez at enfuegonow.com agrees, arguing that allowing the players to "opt out of this choice is an ugly one." They should be careful what they wish for.

What would these writers say if Donald Trump bought a professional sports team and told his players they should wear a pro-life logo (perhaps a picture of a child in utero) on their uniform? Would they still be against allowing players to "opt out"?

One of the great things about sports, until recently, has been its ability to unite people. Fans may differ politically, but they come together to root for their hometown, or their country, when the game starts. This has been the greatest casualty of using TV time to flout one's ideological stripes (that conservative players do not act out tells us a great deal about the narcissistic nature of left-wing enthusiasts).

It began in 2016 when Colin Kaepernik said, "I'm not going to stand up to show pride in a flag for a country that oppresses black people and people of color." The irony of being a half-white multimillionaire, who was raised by his white adoptive parents, was not lost on football fans. Worse, the sight of filthy rich football players taking a knee during the national anthem only added to fan alienation.

Now we have Golden State Warriors coach Steve Kerr sounding off about guns and NASCAR officials celebrating what they call "the LGBTQ+ community."

The time has come for the owners of professional sports to issue a joint statement saying that while players are free to express themselves on their own time, they are not permitted to do so once they put on their uniform. There would be an immediate pushback in some quarters, but once the dust settled, fans, players — and especially owners — would be relieved.

Fans go to the games to be entertained, not to be instructed on what to think. The politicization of sports yields no winners.