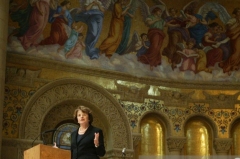 According to multiple news reports, the two leading candidates to fill the opening on the U.S. Supreme Court are Amy Coney Barrett and Barbara Lagoa. Both federal judges are Catholic. This raises a serious issue: In the event that either woman is nominated, senators who have shown a bias against Catholics being seated on the federal bench should recuse themselves.

There are five Democrats who are already tainted. Their remarks were made as members of the Senate Judiciary Committee.

On Sept. 7, 2017, I wrote to him regarding his remarks the day before on the suitability of University of Notre Dame Law School professor Amy Coney Barrett to be seated on the 7th Circuit Court of Appeals. I accused him of crossing the line when he drilled down on her Catholicity.

"Do you consider yourself an orthodox Catholic?" This was a remarkable question posed by Durbin. After all, he attended Catholic schools for 19 years. He said he had "never seen [that term] before." He then asked "what's an orthodox Catholic?" This was disingenuous. Durbin was trying to get Barrett to opine on her Catholic values and how they may affect her judicial decisions. He would never do this to any nominee who was Jewish or Muslim.

This was not the first time Durbin showed his true colors. In 2005, when considering the qualifications of John Roberts, a Catholic, for the Supreme Court, Durbin said that senators need to examine everything, including the faith of the nominee. Yet there is no record of Durbin looking into the faith of non-Catholic nominees for the federal bench.

On Sept. 7, 2017, I wrote to her about comments she made while questioning Barrett the day before. "When you read your speeches, the conclusion one draws is that the dogma lives loudly within you."

I wrote the following to Feinstein.

"No one was fooled by your question. Why didn't you come right out and ask her if she takes her judicial cues from the Vatican? That would be more honest."

I also asked her, "do you, as a matter of course, probe the propriety of having a person of deep faith on the court who is not Catholic? If so, please share that information with me. If not, try treating Catholics as equals."

In 2005, when questioning John Roberts, Feinstein asked him if he agreed with President John F. Kennedy when he pledged to respect separation of church and state. Thus did she dig up the old canard about "dual loyalties." Apparently, she was unaware that Kennedy made his Houston remarks in 1960 following an outburst of anti-Catholicism by leading Protestants.

In 2018, Harris questioned the suitability of Brian C. Buescher to be seated as a federal district judge. On Dec. 26, 2018, I issued a news release condemning Harris for attacking the nominee because he was a member of the Knights of Columbus, a pro-life Catholic organization.

Harris asked Buescher "were you aware that the Knights of Columbus opposed a woman's right to choose when you joined the organization?" Her real target was the Catholic Church's teachings on abortion and sexuality. Harris has also declared war on pro-life activists who expose the ugly practices of abortion mills.

Hirono took the same position against Buescher as Harris did, which is why I included her in my statement of Dec. 26, 2018. Here is what she said to the Catholic nominee. "The Knights of Columbus has taken a number of extreme positions." She cited the Knights' opposition to gay marriage as an example. "If confirmed, do you intend to end your membership with this organization to avoid any appearance of bias?"

If the Knights are "extreme," then millions of Americans, most of whom are not Catholic, are on the fringes. Those who believe that marriage should be reserved for one man and one woman are hardly extremists. They are simply stating the obvious (only a man and a woman can make a family). No matter, Hirono wants those who believe this verity to be excluded from the judiciary.

In effect, Schumer was subjecting Pryor to a "de facto" religious test. Charles Krauthammer said "the net effect of Schumer's 'deeply held views' litmus test...is to disqualify from the bench anyone whose personal views of abortion coincide with those of traditional Christianity, Judaism, and Islam."

These five senators have shown themselves incapable of fairly considering the nomination of a practicing Catholic to the nation's highest court. Should Amy Coney Barrett or Barbara Lagoa be chosen by President Trump to fill the vacancy on the Supreme Court, these Democrats should recuse themselves.