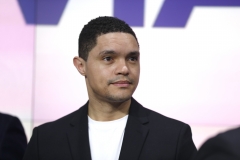 On March 14, Grammy Awards host Trevor Noah was ecstatic over Cardi B's vulgar performance of a modified version of her song, "WAP." The obscene lyrics, sung by a black woman, contribute mightily to racism and sexism. Indeed, they are so filthy that they would win first prize for the most misogynistic song ever written.

Noah likes it that way. Indeed, he flexed his sexist muscles again when he said her rendition reminded him of "a dream I've had to be in bed with Cardi B." That says a lot about who he really is. Black commentator Candace Owens ripped his dream girl for "celebrating perversity in America," a condition inspired by people like Noah.

Fortunately, fewer people watched the Grammy Awards this year than ever before. The ratings were down 53% compared to last year.

Noah's bigotry was also on display when he smeared priests on the March 16 episode of "The Daily Show." Last year, after I filed a serious complaint about Noah to ViacomCBS, the parent company of Comedy Central, he cooled his jets. But now he is at it again, mocking Baptism and depicting all priests as sexual abusers.

It's time we stopped pretending that white supremacists are the problem. The real problem lies elsewhere, namely with Hollywood bigots like Noah: He is responsible for promoting negative stereotypes about black women and Catholic priests. It's time he was condemned for doing so.