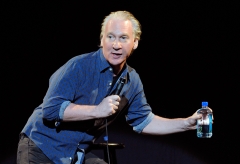 The law recently signed by Florida Gov. Ron DeSantis, the Parental Rights in Education bill, prohibits teachers from instructing kids as young as 5-years-old about sexual orientation and gender identity; it also ensures parental rights. Though it never mentions the word "gay," it is nonetheless being dubbed the "Don't Say Gay" bill.

There are several issues here.

"It's not like there's no kernel of truth in that maybe kids that young shouldn't be thinking about sex at all." Those are not the words of a prude — those are the words of Bill Maher. Speaking about supporters of the DeSantis bill, he noted that "it's not like you're not allowed to literally not say gay, but they just don't want teachers talking about it. They think it's the province of parents."

So if Maher gets it, why don't others? Why did a trio of women hosts at the Oscars slam the law, jumping up and down yelling, "Gay, Gay, Gay"? Why did Hillary Clinton also mislabel the bill, punctuating her recent podcast with, "Gay, Gay, Gay"? What's wrong with these people?

It's one thing for the political opponents of the law, including celebrities, to call it the "Don't Say Gay" bill, quite another when the media do the same. To be sure, the media have every right to quote critics of the bill who characterize the bill this way, but they have no right to officially brand it this way.

We did a Nexis search of the number of media outlets that, in its headline, identified the bill as the "Don't Say Gay" bill. From March 1 to April 8, we found over 450 such instances.

When conservatives put a negative political label on a bill they dislike, the media invariably identify it by its proper name — the one given to it by the bill's sponsor. They may shorten the Affordable Care Act to ObamaCare, but they won't publish a headline calling it the "Socialist Healthcare" bill. Nor should they. But when it comes to their political allies in the Democratic Party, they have a different set of rules.

What's wrong with these people? Why do they prostitute their journalistic ethics?

What's really wrong with all of these people is not simply that they lie about the bill, but that they really want little kids to be sexually engineered by teachers, preferably behind the back of their parents. They need to be confronted and defeated at every level.